US Open: Ekaterina Makarova Tunes up for Serena Williams Showdown With Doubles Win

Russians Ekaterina Makarova and Elena Vesnina ended the surprising run of Japanese veteran Kimiko Date-Krumm and Czech partner Barbora Zahlavova Strycova 7-5, 6-3 and will take on Martina Hingis and Flavia Pennetta in the final. 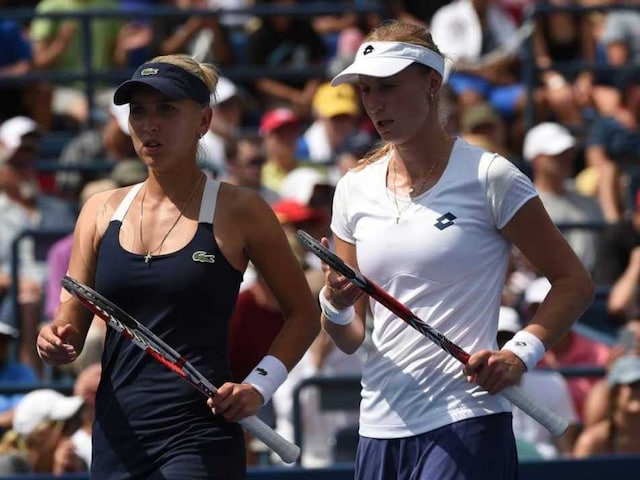 Ekaterina Makarova (R) and her doubles partner Elena Vesnina in action during the 2014 US Open.© AFP
New York:

Ekaterina Makarova limbered up for her US Open semi-final showdown with world number one Serena Williams by booking a spot in the women's doubles final with Elena Vesnina on Thursday.

The two Russians ended the surprising run of Japanese veteran Kimiko Date-Krumm and Czech partner Barbora Zahlavova Strycova 7-5, 6-3 and will take on Martina Hingis and Flavia Pennetta in the final.

Before then, however, there's the little matter of Makarova's first Grand Slam singles semi-final on Friday.

Asked if doubles was a welcome distraction from the intimidating task of tackling 17-time Grand Slam champion Williams, Makarova said she wasn't thinking about it quite that way.

"It's special, but I'm not thinking all the time I'm in a Grand Slam against Serena," Makarova said.

Chimed in Vesnina -- "She's a very calm girl. It's really difficult to surprise her."

Vesnina is delighted by her partner's success in singles, recalling that she played doubles with Russian compatriot Vera Zvonareva at the 2011 Australian Open when Zvonareva reached the last four.

"It's great to have a partner who's winning in singles and giving 100 percent in doubles," she said.

Makarova and Vesnina, who took out Serena and sister Venus in the doubles quarter-finals, have won four WTA titles as a team, including the French Open women's doubles last year.

After a disappointing grass court campaign, including a round of 16 exit at Wimbledon, they put in some extra doubles practice together and all of a sudden, Vesnina said, "it clicked."

And things have clicked for Makarova in singles, as she dispatched seventh-seeded Eugenie Bouchard and former world number one Victoria Azarenka -- runner-up to Williams the past two years -- to reach the semi-finals of a major for the first time after four quarter-final disappointments.

"To win the Grand Slam it's ... always the dream," she said. "From the kid when I was going to school and then came back home and watching some matches. You don't believe that you can be here, and finally you're here and going so far."

Comments
Topics mentioned in this article
Ekaterina Makarova Elena Vesnina Serena Williams Kimiko Date-Krumm Barbora Zahlavova Strycova Tennis
Get the latest Cricket news, check out the India cricket schedule, Cricket live score . Like us on Facebook or follow us on Twitter for more sports updates. You can also download the NDTV Cricket app for Android or iOS.