Daniil Medvedev stopped Novak Djokovic's bid for calendar-year Grand Slam as he beat the World No.1 in straight sets to win the US Open title on Sunday. 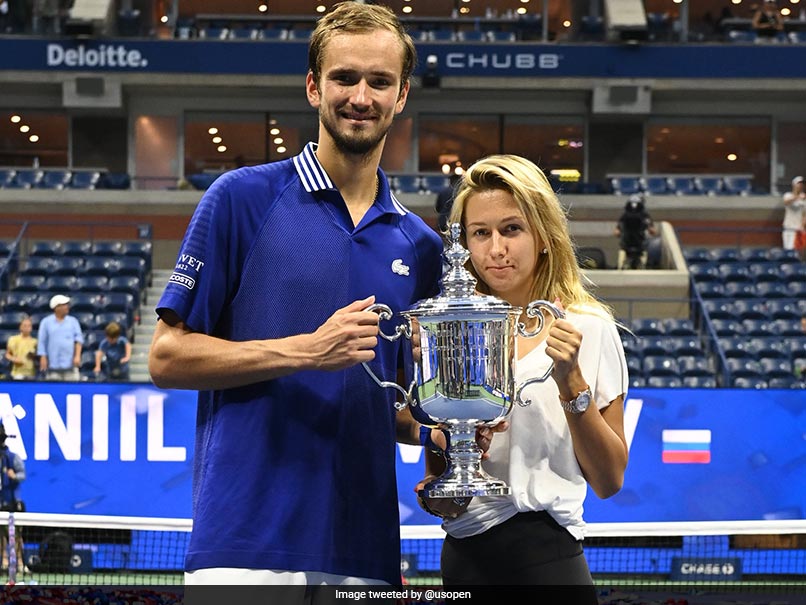 Daniil Medvedev won the US Open title with win over Novak Djokovic on Sunday.© Twitter

Daniil Medvedev won his maiden Grand Slam title on Sunday as he beat world number one Novak Djokovic in the US Open men's singles final in straight sets. The 25-year-old Medvedev won the match 6-4, 6-4, 6-4. The victory was more sweet for the Russian tennis star as it came on the day of his third wedding anniversary. After the win, Medvedev said he had no time to get his wife a present so he was left with no choice but to win the US Open title.

"I want to finish my speech on a very special note. It's the third anniversary for me and my wife. During the tournament, I couldn't think of a present. So when I went in the final, I thought, 'I need to find a present fast.' When I won, the only thing I thought, if I lose I have no time to have a present. So I have to win this match. I love you, Dasha," Medvedev said.

The official Instagram handle of the US Open posted a video of Medvedev's sweet note for his wife and captioned it as "Daniil Medvedev got himself the best wedding anniversary gift."

In the summit clash, Djokovic dropped the first set 4-6 after two unforced errors from the Serbian gave Medvedev an easy break.

In the second set, Djokovic had three early break points but failed to capitalise as the Russian managed to hold his serve. Medvedev broke in the fifth game and took the set 6-4.

Distracted by the crowd at the Arthur Ashe Stadium, Medvedev double faulted on championship point and again, then netted a forehand to surrender a break that kept Djokovic in the match.

Serving again for the match at 5-4, Medvedev double-faulted on his second match point but finally got over the line on his third chance with a service winner after two hours and 16 minutes.

Novak Djokovic Daniil Medvedev Tennis
Get the latest updates on ICC T20 Worldcup 2022, check out the Schedule and Live Score. Like us on Facebook or follow us on Twitter for more sports updates. You can also download the NDTV Cricket app for Android or iOS.