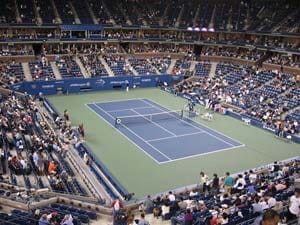 US Open prize money will reach $50 million by 2017 and the event will return to a Sunday finish in 2015 under a five-year deal announced on Wednesday between Open organisers and the ATP and WTA tours.

"These increases are the largest in the history of the sport, representing a significant step forward in truly recognizing the input the players have in the success of the US Open," ATP president Brad Drewett said.

Men's players have protested against the crush of matches on consecutive days in recent years due to rain delays in order to have a Sunday finish.

Despite that, the men's final has been delayed to Monday for the past five years.

The US Open did not provide for a stadium with a roof in major renovation plans announced last year, but it does plan to have a Monday finish this year in order to allow a day between the semi-finals and final, something missing in recent years because of the "Super Saturday" format with the women's final.

"Everyone I have spoken with is excited about the increases in prize money as well as the agreement to change the schedule for 2015 and beyond," said 17-time Grand Slam champion Roger Federer, president of the ATP player council.

In recent years, the US Open has played the men's first round over three days. That likely would be trimmed to two days in order to fit a draw of 128, seven matches for the champion, into 14 days.

"With this unprecedented commitment to long-term prize money and recognition of the value that players bring to the sport, we will gain stability for the sport so that we can focus our energy on growing the game," USTA president David Haggerty said.

Federer said the USTA "approached our concerns with a true spirit of partnership."

The USTA said it would announce exact round-by-round distribution of prize money for this year's US Open later this year with further prize money boosts to be announced annually, but payouts would remain equal for men and women.

"We applaud the USTA's long-term commitment to increased and fair compensation for our athletes," WTA chairman Stacey Allaster said on Wednesday. "Today's announcement is a testament to their continued bold vision for the sport."

This year's US Open is scheduled to run from August 26 to September 9.

Comments
Topics mentioned in this article
Tiger Woods Tennis Leander Paes Marion Bartoli Sania Mirza Maria Sharapova Jelena Dokic Mathilde Johansson Lucie Safarova Petra Martic
Get the latest updates on IPL 2020, check out the IPL Schedule for 2020 and Indian Premier League (IPL) Cricket live score . Like us on Facebook or follow us on Twitter for more sports updates. You can also download the NDTV Cricket app for Android or iOS.