Far from being despondent after her 7-6 (7/4), 6-2 loss to her childhood friend Flavia Pennetta in the US Open 2015 final, the 32-year-old Roberta Vinci instead showed off a nice line in stand-up comedy. 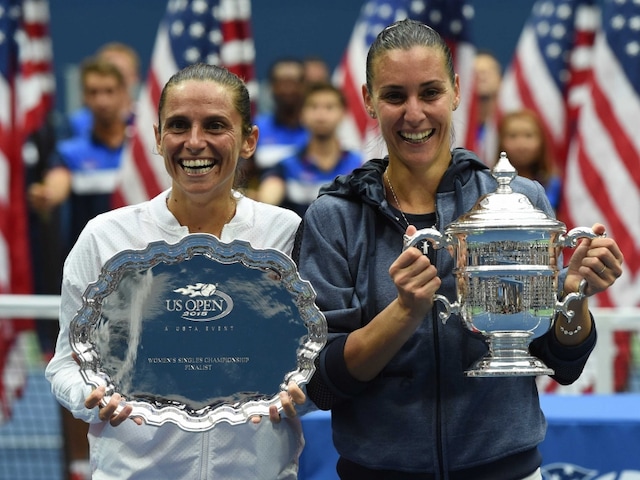 Roberta Vinci shrugged off her US Open final loss to fellow Italian Flavia Pennetta by dreaming of home-made pasta and enjoying her last New York hamburger.

Far from being despondent after her 7-6 (7/4), 6-2 loss to her childhood friend, the 32-year-old Vinci instead showed off a nice line in stand-up comedy.

Poking fun at what she described as her poor command of English, Vinci admitted she was a fan of the host city but yearned for her home in Taranto in the south of Italy.

"I love New York. Today probably this is my last cheeseburger, and then tomorrow pasta, real pasta at home," she said, raising her hands to the sky in mock relief.

"But, no, I enjoy all the season, all the US Open season. I play so good. Yeah, my emotions are difficult to say, especially in English."

Vinci had defeated Serena Williams in the semi-finals, shattering the American's bid to capture the first calendar Grand Slam since 1988. (Pennetta Announces Retirement)

She joked that she received as many messages of congratulations for her English as she did for her victory, comfortably one of the greatest shocks in the history of the sport.

"I receive a lot of congratulations about my interview, but my English is so bad.

"The press say, Congratulations, Good job. Because I beat Serena? No, for your interview. Grazie. Thank you. I'm not joking. Is true. Thank you. I need to improve my English, eh?"

Vinci, ranked at 43 in the world, had already become the oldest first-time semi-finalist at a major in the Open era after never previously getting beyond the quarter-finals.

Coming into the tournament, she had only defeated two opponents in the top 30 all year.

Hardly a surprise, then, that she described her win over Williams as a miracle.

"Miracles can happen. Because I beat Serena, miracle. And then two Italians can reach the Grand Slam final, a miracle. And one Italian player can win a Grand Slam, another miracle," she said.

Vinci also dismissed suggestions that she could have been saved by the rain, which began to fall in the dying stages of Saturday's final.

Vinci and Pennetta have been friends since they were nine and roomed together at the Italian tennis headquarters in Rome.

But she has no intention of following the champion into retirement.

"No, really. I like to play tennis, so I have a passion and I work in art," she said. "Now I reach one final Slam, so I'm happy." (Pennetta Happy to Quit as Champion)

Comments
Topics mentioned in this article
Roberta Vinci Flavia Pennetta Tennis
Get the latest Cricket news, check out the India cricket schedule, Cricket live score . Like us on Facebook or follow us on Twitter for more sports updates. You can also download the NDTV Cricket app for Android or iOS.