Top seeded John Isner won through to the quarter-finals of the $500,000 Hall of Fame Championships by beating France's Arnaud Clement in straight sets. 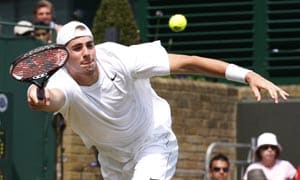 Top seeded John Isner won through to the quarter-finals of the $500,000 Hall of Fame Championships by beating France's Arnaud Clement in straight sets.

Isner took the second round match 7-6 (7/4), 6-4 by winning 80 percent of his first serve points at the grass court ATP tournament on Wednesday.

The 6ft 9in, 26-year-old Isner also used his booming serve to hammer 11 aces.

"When I get off to an early break, that's when I feel like I'm in control," he said. "I feel like I play my best when I'm ahead. It didn't happen in the first set, but it did in the second."

Isner seized control when he broke Clement in the seventh game of the second set to take a 4-3 lead after the Frenchman double-faulted on the final point.

Isner will next face American compatriot Alex Bogomolov in the semi-finals.

Comments
Topics mentioned in this article
John Isner Arnaud Clement Tennis
Get the latest updates on IPL 2021, check out the IPL 2021 Schedule and Indian Premier League Live Score . Like us on Facebook or follow us on Twitter for more sports updates. You can also download the NDTV Cricket app for Android or iOS.