Tommy Haas' hopes of making the ATP World Tour Finals in London was dented when he lost to Philipp Kohlschreiber in the first round of the Valencia Open. Haas lies 12th in the race to London standings. 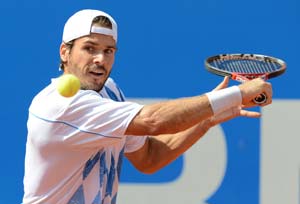 German veteran Tommy Haas' hopes of making the ATP World Tour Finals in London next month took a huge blow as he was beaten by Philipp Kohlschreiber in the first round of the Valencia Open on Wednesday.

The number two seed got off to the perfect start as he took the opening set.

However, fellow German Kohlschreiber responded well to break serve early in the final two sets and serve out for a 3-6, 6-3, 6-3 victory.

Haas lies 12th in the race to London standings, but his chances of making it to the English capital had been raised by winning in Vienna last Sunday and an early exit for Richard Gasquet at the Swiss Indoors in Basel also on Wednesday.

However, he now faces a huge task at the Paris Masters next week to claim one of the remaining three places on offer.

Earlier, world number three David Ferrer booked his place in the second round with a confident 6-3, 6-2 win over Gael Monfils.

The first seed was expected to be stretched by the mercurial Monfils having lost three of the previous four meetings between the pair.

However, he edged a tight first set, saving two break points to serve it out in the ninth game before breaking twice early in the second to cruise to victory.

"Games against Gael are never easy, he has great physical power and it was a hard fought match," said the Spaniard.

Next up for the three-time champion in Valencia is another Frenchman, Julien Benneteau, on Thursday.

And seventh seed Fabio Fognini became the first man to book his place in the quarter-finals as he eased past Marcel Granollers 6-3, 6-2.