The second-seeded German, won also won the event 12 years ago, maintained his slim chance of qualifying for next month's ATP finals in London. 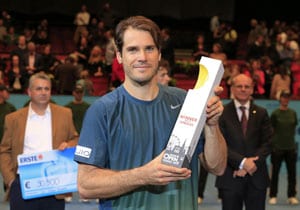 Tommy Haas won his 15th career title and second this season, defeating Robin Haase of the Netherlands 6-3, 4-6, 6-4 at the Erste Bank Open on Sunday.

The second-seeded German, won also won the event 12 years ago, maintained his slim chance of qualifying for next month's ATP finals in London.

Haas came back from a break down to win the opening set but was broken while serving at 5-4 down in the second. Haas trailed 4-2 in the deciding set before winning four straight games.

The 35-year-old Haas already had become the oldest tournament winner of the season by winning in Munich in May.

It was Haase's second defeat in a final this year after losing three months ago in Gstaad, Switzerland.

Comments
Topics mentioned in this article
Tennis Rohan Bopanna Tommy Haas Robin Haase Aisam-Ul-Haq Qureshi Julien Benneteau John Isner
Get the latest updates on IPL 2021, check out the IPL 2021 Schedule and Indian Premier League Live Score . Like us on Facebook or follow us on Twitter for more sports updates. You can also download the NDTV Cricket app for Android or iOS.