Russia's Svetlana Kuznetsova beat Alison Riske of the United States 6-3, 6-3 in the first round of the ASB Classic on Tuesday. 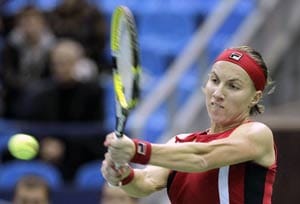 Russia's Svetlana Kuznetsova beat Alison Riske of the United States 6-3, 6-3 in the first round of the ASB Classic on Tuesday.

Kuznetsova, a former French and US Open winner, was playing her first match since suffering a groin strain injury in November. The third seed showed few signs of inactivity, hitting eight aces to beat Riske in 75 minutes.

"I missed playing for one and a half months and obviously I was a little bit slow, but I was calm and in the end it was a good game," Kuznetsova said.

Kuznetsova's next opponent, American Christina McHale, has beaten her in their two previous matches.

"It's been a long time since I last played and it was my first match of the year so I was a little nervous," she said. "I was tired and so slow and it was hard to get into the match because she hit the ball so well. It was like boom, boom, boom."

Goerges won her match in two hours, 20 minutes despite feeling ill and taking a long medical break at the start of the third set, during which her pulse and blood pressure were taken.

After losing the first set in which she converted only one of nine break point chances, Arn took charge in the second, saving all three break points she faced and converting two of seven on her own serve.

Goerges signaled to her coach several times during the third set that she was tired and lacking energy, but she managed to rally, breaking Arn immediately after the medical timeout and then again to take the match.

"I wasn't really at 100 percent," Goerges said. "I was sick the whole week but that's not an excuse.

"Greta played a very good match which is what I expected because she's the champ here. It was a tough match and I was happy to somehow come through."

Comments
Topics mentioned in this article
Alison Riske Tennis Svetlana Kuznetsova Jelena Jankovic Agnieszka Radwanska Jie Zheng
Get the latest Cricket news, check out the India cricket schedule, Cricket live score . Like us on Facebook or follow us on Twitter for more sports updates. You can also download the NDTV Cricket app for Android or iOS.