The Swiss number two solidified his seventh place ranking with a confident 6-3, 6-2 hammering of his Spanish 12th seeded opponent. 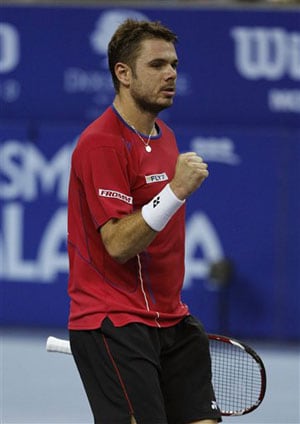 Stanislas Wawrinka took another step towards the World Tour Finals on Thursday when he defeated Nicolas Almagro to reach the quarter-finals of the Paris Masters.

The Swiss number two solidified his seventh place ranking with a confident 6-3, 6-2 hammering of his Spanish 12th seeded opponent.

The win sets up a potential quarter-final against either Serbia's world number two Novak Djokovic or big-serving American John Isner, who meet later on Thursday.

Wawrinka will join his Olympic double's partner Roger Federer for the season's grande finale in the English capital, should either Frenchman Richard Gasquet or Milos Raonic of Canada lose their third round matches.

The 28-year-old also remains on course for a fifth career ATP victory as he puts the finishing touches on what has been his finest season.

When asked about who he might prefer in Friday's quarter-finals, he admitted Djokovic was the man he wanted to have a crack at after several thrilling ties this season including the US Open semi-final which the Serb won in five sets.

"If I do have a preference it would be Novak because we've had some great matches in the past,"

"As for today, well we knew each other very well and I know he's a dangerous player but I changed tactics when I had to and didn't get frustrated," he added after reaching his 13th quarter-final of the season.

"I knew when I came here that my destiny was in my own hands and I had to win matches but if I don't make it then I wasn't good enough." he concluded.

While Canada's Davis Cup semi-finalist and 10th seed Raonic has a stiff challenge in his third round tie against Czech world number Thomas Berdych.

The 22-year-old has to reach the final in Paris to snatch one of the final spots from Wawrinka or Gasquet with these three players battling for the final two slots.

Federer became the lastest player to seal his place at London on Wednesday when he sailed past South African Kevin Anderson 6-4, 6-4 for his 12th straight appearance at the World Tour Finals.

He said following the victory that it had been a hard slog to complete his task.

"I sort of entered into a tunnel. I was practicing so hard because I needed it that I kept focusing on myself.

"Of course, London was in the air somewhere. I just thought that either I'm good enough or I'm not good enough. If I miss, I miss. But it was clear if I made it, I would be happy. Now it's the case.

"In a way I'm relieved, but mainly I'm happy and proud of having been able to do that in a difficult year."