Somdev Devvarman bows out of ATP Open 13 in France

Somdev, who had shocked world number 39 Benoit Paire in the opening round, went down 3-6 5-7 against Bernard Tomic in the second round in one hour and 12 minutes. 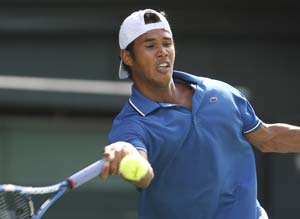 Somdev Devvarman could not go deep into the singles main draw after a stupendous start as the Indian bowed out of the ATP Open 13 tournament with a straight-sets defeat against Australia's Berand Tomic, in Marseille on Wednesday.

Somdev, who had shocked world number 39 Benoit Paire in the opening round, went down 3-6 5-7 against world number 46 in the second round in one hour and 12 minutes.

Somdev perhaps had not recovered from the gruelling first round encounter against Paire to counter a formidable rival in Tomic.

Somdev though showed tremendous grit and will to fight as he came back to level the second set after being down a break at 3-5. Tomic broke him in the 12th game to clinch the issue.

Meanwhile, India's challenge is still alive in the doubles with Rohan Bopanna and his British partner Colin Fleming reaching the quarter-finals.

They beat Robin Haase and Dick Norman 6-4 6-2 in their opening round.