The 20-year-old Stephens has improved 26 places in the rankings to No. 12 this year. Isner won the 2011 Hopman Cup with Bethanie Mattek-Sands and combined with Venus Williams for the 2013 edition. 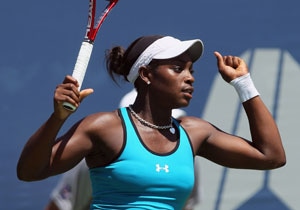 The 20-year-old Stephens, who upset Serena Williams in the Australian Open quarterfinals to start 2013, has improved 26 places in the rankings to No. 12 this year.

Isner won the 2011 Hopman Cup with Bethanie Mattek-Sands and combined with Venus Williams for the 2013 edition.

Petra Kvitova, the 2011 Wimbledon champion who won the 2012 Hopman Cup with Tomas Berdych, will be joined on the Czech team by veteran Radesk Stepanek for the Dec. 28-Jan. 4 event.

Under the competition format, eight teams are split into two groups for matches including men's and women's singles and mixed doubles. The winners of each round-robin group advance to a final.

Poland will make its debut in the tournament with a team containing No. 4-ranked Agnieszka Radwanska and Wimbledon semifinalist Jerzy Janowicz.

U.S. Open semifinalist Andreas Seppi will join Flavia Pennetta in the Italian team, and Milos Raonic will team up with Eugenie Bouchard for Canada.

"I think Hopman Cup is a great way to start the year. You have a lot of guaranteed matches, a lot of opportunities to find your way especially after the off season," Raonic said. "It gives you a chance to really get match sharp. It's a great competitive atmosphere, a team atmosphere, something different and something I haven't been involved in."

Comments
Topics mentioned in this article
Tennis John Isner Sloane Stephens
Get the latest updates on ICC T20 Worldcup 2022 and CWG 2022 check out the Schedule, Live Score and Medals Tally. Like us on Facebook or follow us on Twitter for more sports updates. You can also download the NDTV Cricket app for Android or iOS.