Sixth-seeded Robin Haase recovered from a shaky first set to beat Simone Bolelli 6-3, 6-2 Monday and advance to the second round of the Estoril Open. 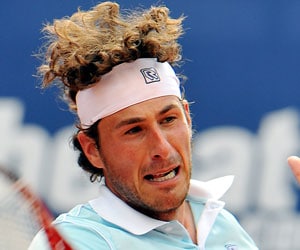 Sixth-seeded Robin Haase recovered from a shaky first set to beat Simone Bolelli 6-3, 6-2 Monday and advance to the second round of the Estoril Open.

The Dutchman saved a break point in the fifth game and broke Bolelli's service in the following game. The Italian fought back to 4-3, but after squandering four break points in the eighth game his opponent pulled into a 5-3 lead and took the set with his second ace.

Haase looked more comfortable in the second set and ended the match with 80 percent of his first serves on target and 23 unforced errors compared with 43 for Bolelli.

In the women's first round, top-seeded Roberta Vinci dropped a set as she overcame Russia's Nina Bratchikova 6-1, 1-6, 6-4.

Comments
Topics mentioned in this article
Tennis Robin Haase Rohan Bopanna Julien Benneteau Aisam-Ul-Haq Qureshi John Isner Alisa Kleybanova Fernando Verdasco Juan Martin del Potro
Get the latest updates on IPL 2020, check out the IPL Schedule for 2020 and Indian Premier League (IPL) Cricket live score . Like us on Facebook or follow us on Twitter for more sports updates. You can also download the NDTV Cricket app for Android or iOS.