Top-seeded Agnieszka Radwanska bowed out of her opening match at the New Haven Open Tuesday, retiring in the second set against qualifier Olga Govortsova with a sore shoulder. 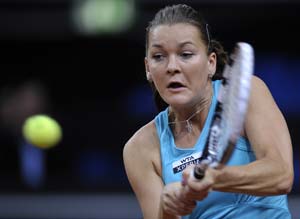 Top-seeded Agnieszka Radwanska bowed out of her opening match at the New Haven Open Tuesday, retiring in the second set against qualifier Olga Govortsova with a sore shoulder.

The world's second-ranked player, who received a bye in the first round, dropped the opening set 6-0 and was down 2-1 and a break in the second set when she ended the second-round match.

A trainer was called between sets to work on Radwanska's right shoulder, which she said has been bothering her since the start of the hardcourt season.

"It's just inflammation," she said. "I really put on the shoulder a lot of tennis the last couple of weeks and my shoulder is saying 'no' sometimes when I go on the court."

Radwanska, who mentioned her shoulder problems last week after a straight-set loss to Li Na in Cincinnati, said she is hoping it will be fine for next week's U.S. Open, but she didn't want to risk a more serious injury by finishing out this match.

"The Grand Slam is the most important tournament, obviously," she said. "I was just scared to play more."

Govortsova, ranked 82nd in the world, had lost in straight sets in her only two previous meetings with the Polish star.

She said it was her play, more than her opponent's shoulder, that dictated the winner this time.

"The key was I started the match really well," she said.

Radwanska looked sluggish from the start. Govortsova was able to move her around the court and kept her back by putting some well-placed lobs over her head when she came in.

"I think she played all right, but think I didn't do anything there to win more, that's for sure," said Radwanska.

Govortsova, who won a three-set match over Russia's Vera Dushenvina in the first round Monday, will play seventh-seeded Maria Kirilenko of Russia in the quarterfinals. Kirilenko advanced Tuesday when Germany's Mona Barthel withdrew from their second-round match with a stomach bug.

Earlier, Marion Bartoli of France rallied from 3-0 down in the third set to reel off the next six games and beat 19-year-old American Sloan Stephens.

The fifth-seeded Bartoli had lost nine straight games before finding her groundstrokes and overpowering the 19-year-old Stephens 6-1, 0-6, 6-3.

"I started to hit the ball harder, be mentally very tough," she said. "The crucial game was at 3-2 when I served for 20 minutes or so, and I was able to hold my serve to get back to 3-all. From there, I felt a bit more comfortable."

Stephens appeared in control of the match after sweeping through the second set and taking the first three games in the third. But Bartoli became found another gear, becoming vocal with herself and screaming "Come on" after each game-winning shot.

"I think she raised her level back to where it was in the first set," Stephens said. "Things went her way, but I think we still played a pretty high level of tennis. It just happened."

This is Bartoli's ninth trip to New Haven since 2003 and her sixth quarterfinal. She has never advanced further.

Bartoli will face fourth-seeded Sara Errani of Italy in the quarters. Errani beat Carla Suarez Navarro of Spain in straight sets, 6-4, 6-3 in the second round.

"We know each other very well," said Errani. "We play a lot of time in practice and matches, so I was thinking what she was thinking. I think I played a good match."

It has been a break-through year for Errani, who has already won four tournaments this season and reached the final at the French Open, losing to Maria Sharapova in the title match.

"It was an amazing two weeks for me," said Errani. "It changed my mentality a bit because after that, I made the top 10. You have to think a bit different than normal in tournaments. It's very nice for me to be top 10. It's a dream, and I want to continue to be like that."

Comments
Topics mentioned in this article
Tennis Badminton Agnieszka Radwanska Caroline Wozniacki Petra Cetkovska
Get the latest Cricket news, check out the India cricket schedule, Cricket live score . Like us on Facebook or follow us on Twitter for more sports updates. You can also download the NDTV Cricket app for Android or iOS.