Maria Sharapova's Campaign Off To Tough Start In Shenzhen

The match between Maria Sharapova and Timea Bacsinszky lasted an hour 42 minutes. 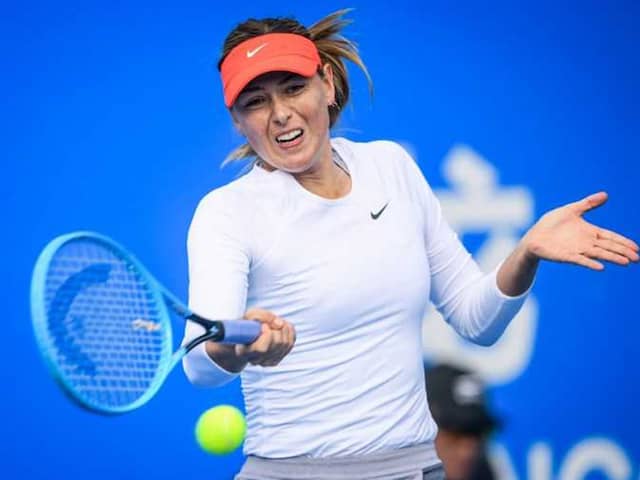 Five-time Grand Slam champion Maria Sharapova had a tough start to her 2019 tennis season Monday at the Shenzhen Open, edging out Switzerland's Timea Bacsinszky 6-2, 7-6 (7/3). In a battle of former Top 10 players, Sharapova's serve faltered early in the match but she regained composure to take the first set, cheered on by the spirited crowd at the Shenzhen Longgang Sports Center. Bacsinszky put up a strong fight in the second set, claiming the first two games and forcing Sharapova to step up her game.

The Russian powered through to take the match in one hour 42 minutes.

"It's been a few months since I've been out of playing competitively," Sharapova said in a post-match interview, calling Shenzhen a "warm-up tournament" for next month's Australian Open.

"Considering the opponent and everything I had to go through today I think it was a great practice for me."

Sharapova, who won the last of her five Slams at Roland Garros in 2014, has endured a disappointing return to the majors since the end of her drugs ban in April of 2017.

She will next face 17-year-old Chinese wild card Wang Xinyu.

The tournament, which runs until Saturday, will see players battling for $750,000 in prize money.

Comments
Topics mentioned in this article
Maria Sharapova Timea Bacsinszky Tennis
Get the latest Cricket news, check out the India cricket schedule, Cricket live score . Like us on Facebook or follow us on Twitter for more sports updates. You can also download the NDTV Cricket app for Android or iOS.