Williams broke Azarenka's serve three times in a one-sided first set and despite a tighter second set the American prevailed to stretch her career-best winning streak to 24 games. 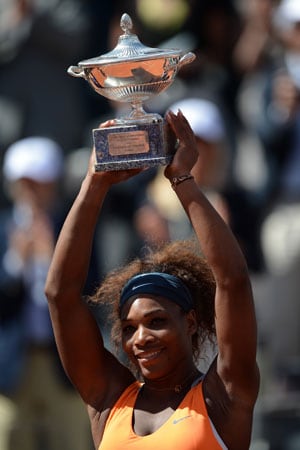 Williams broke Azarenka's serve three times in a one-sided first set and despite a tighter second set the American prevailed to stretch her career-best winning streak to 24 games.

It was Williams's 51st career title and took her victory tally over Azarenka, who beat the American earlier this season in the final of the Doha hardcourt event, to 12-2 in their series.

Azarenka had swept Sara Errani aside in the semi-final on Saturday with a powerful display of tennis which left the Italian, who only made the last four after Russian second seed Maria Sharapova pulled out, struggling to mount any kind of challenge.

However the tables were promptly turned on the third-seeded Belarusian, who found herself on the end of a Williams masterclass that has installed her as the favourite for next week's French Open at Roland Garros.

Williams had complained after her semi-final over Romanian qualifier Simona Halep that she had been unhappy with several elements of her game, prompting a lengthy practice after her match on Saturday.

Any hint of rustiness or nerves before the final were quickly put to bed.

Williams started in stunning fashion, breaking Azarenka's serve in the first game and going on to repeat that twice more on her way to a crushing 6-1 score.

Azarenka upped her game in the second but despite showing some signs of resistence early on, Williams's far more powerful serve and return left the Belarusian frustrated.

More often than not, the American required only two shots on her service game to take the required point, and Azarenka was given a warning by the umpire for an obscenity early in the second set.

Azarenka did earn herself a lifeline when she broke Williams in the seventh game after the American sent a backhand just outside the line.

But the top seed rattled off three consecutive games, including a break in the eighth game, before finishing off the job with a backhand winner down the line following two aces.

It is Williams's second title at Rome, having first won the event in 2002.