Serena Williams was also happier with her performance against Sara Errani in the semis than the error-strewn display she produced against Spanish wildcard Anabel Medina Garrigues in the quarter-finals. 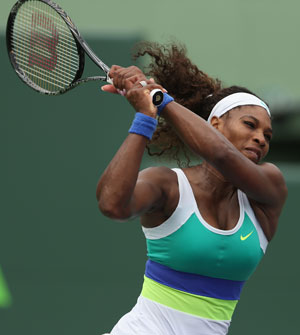 World number one Serena Williams sealed her place in the Madrid Open final for the second consecutive year as she overcame seventh seed Sara Errani 7-5, 6-2 on Saturday.

Williams, who could face a showdown for the number one ranking with Maria Sharapova in the final should the Russian come through her semi-final with Ana Ivanovic, just edged the first set when she broke for the third time in the 12th game.

The American was then far more comfortable in the second as she wasn't broken at all and again sealed the set and the match by breaking the Errani serve to move through after just over 90 minutes.

And Williams was happier with her performance against the Italian than the error-strewn display she produced against Spanish wildcard Anabel Medina Garrigues in the quarter-finals.

"I feel that I played solid. In the second set more than the first I made a few less errors, which was something that I needed to do," she said after the match.

The 15-time Grand Slam champion claimed she wouldn't be paying too much attention to the other semi-final, but insisted she believes she is the world's best player and is dead set on retaining her status as number one.

"I try not to pay too much attention. I always just try to play my game. You're playing players who you know their strengths and weaknesses.

"Obviously I love being number one. In my heart I feel I'm number one, but also I love to win tournaments.

"So I think if I just win as many tournaments as I can then I'll continue to be number one."