Serena Williams is launching a third bid to match Steffi Graf's Major record, although just three of Williams' 21 Grand Slam titles have come in France -- the first in 2002 and then a long gap until 2013 and 2015. 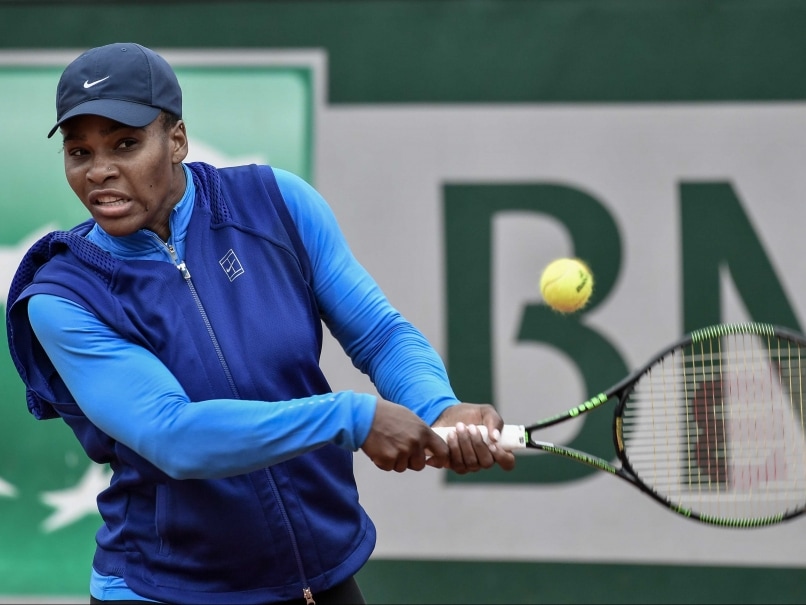 American tennis player Serena Williams hits a return during a training session ahead of the French Open on Saturday at the Roland Garros Stadium in Paris.© AFP

Serena Williams said she was feeling relaxed about her hopes of defending her French Open crown on Friday and drawing level with Steffi Graf's Open Era record of 22 Grand Slam singles titles.

The 34-year-old, whose two previous attempts to retain the title at Roland Garros ended prematurely, will begin her defence against Slovakia's Magdalena Rybarikova, the world number 76, who has yet to make it beyond the second round in Paris.

"I think in the past there was," said Williams, who beat Lucie Safarova in last year's final, when asked whether she approached tournaments where she was the defending champion with a different mindset.

"Whereas five, ten years ago, oh, I'm defending and I feel that pressure. Now it's like I'm defending, I'm in Paris, it's cool, and I'm having, you know, the time of my life. I'm just happy to be here."

The top-ranked American is launching a third bid to match Steffi Graf's major record, although just three of Williams' 21 Grand Slam titles have come in France -- the first in 2002 and then a long gap until 2013 and 2015.

Williams could come up against former world number one and two-time Australian Open champion Victoria Azarenka, who defeated the American at Indian Wells in March, in the quarter-finals.

However, a pair of former champions lie in wait beforehand with 2010 winner Francesca Schiavone a potential third-round opponent and Ana Ivanovic, who claimed her lone Grand Slam on Court Philippe Chatrier in 2008, a prospective last-16 foe.

Williams arrives in the French capital full of confidence and on the back of a first title in nine months after knocking off compatriot Madison Keys in last weekend's Rome final.

Williams has played sparingly since losing out on a chance at the calendar Grand Slam at last year's US Open, featuring in just four tournaments this season but reaching the final in three of those.

"I guess when you win all the time, if you go a couple of tournaments and don't win them it's like you're in a drought," she said, with her victory in Italy the 70th of her career and first since triumphing in Cincinnati last August.

Two players Williams won't have to worry about in Paris are two-time champion Maria Sharapova, who is serving a doping suspension, and the injured Caroline Wozniacki.

Comments
Topics mentioned in this article
Serena Williams Caroline Wozniacki Lucie Safarova Tennis
Get the latest updates on IPL 2021, check out the IPL 2021 Schedule and Indian Premier League Live Score . Like us on Facebook or follow us on Twitter for more sports updates. You can also download the NDTV Cricket app for Android or iOS.