Serena Williams put the United States into a commanding 2-0 lead in the Fed Cup World Group play-off tie with Ukraine at Kharkiv on Saturday by beating Elina Svitolina in straight sets. 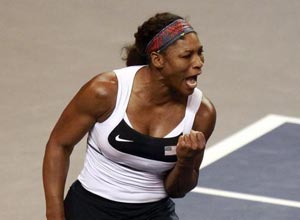 Serena Williams put the United States into a commanding 2-0 lead in the Fed Cup World Group play-off tie with Ukraine at Kharkiv on Saturday by beating Elina Svitolina in straight sets.

The 30-year-old Williams was never troubled by her teenage opponent who she was playing for the first time.

"It was a tough match against a strong opponent," Williams said.

"Don't look at the scoreline as it was much harder that it may appear. My opponent, a young and talented 17-year-old player has a bright future, I believe. It was very interesting to play against her today."

"I will definitely play against (Lesia) Tsurenko tomorrow. And I will do my best to win the third deciding point for my country."

Williams looked confident from the start producing three breaks of serve in the opening set to take it in 30 minutes, while Svitolina managed to break back only on one occasion.

In the second set Williams moved up a gear to break her opponent's serve three times for a commanding 5-0 lead before Svitolina chalked up her first point also with a break.

But in the next game Williams produced her fourth break to take the set and the match in one hour.

Speaking about her London Olympics prospects the 13-time Grand Slam champion Williams said: "I'm set to go to London in July and I'm out to win a gold medal there."

In Saturday's opening rubber Christina McHale put the United States 1-0 ahead with a 6-1, 4-6, 6-3 win over Lesia Tsurenko in two hours 14 minutes.

Comments
Topics mentioned in this article
Agnieszka Radwanska Ana Ivanovic Angelique Kerber Christina McHale Tennis Mardy Fish Andrea Petkovic Serena Williams Samantha Stosur Dominika Cibulkova
Get the latest updates on IPL 2020, check out the IPL Schedule for 2020 and Indian Premier League (IPL) Cricket live score . Like us on Facebook or follow us on Twitter for more sports updates. You can also download the NDTV Cricket app for Android or iOS.