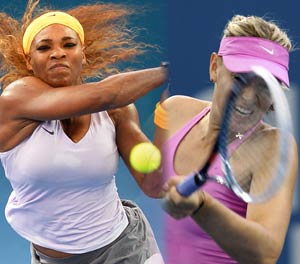 Serena Williams and Maria Sharapova will renew their long and not-so-friendly rivalry after setting up a semifinal matchup at the Brisbane International, a key tuneup event for the Australian Open.

Top-ranked Williams, the defending champion, didn't lose a point on her serve in the first set en route to a 6-3, 6-3 win over ninth-seeded Diminika Cibulkova of Slovakia in just over an hour.

Third-seeded Sharapova, meanwhile, needed two hours to beat 2012 Brisbane champion Kaia Kanepi 4-6, 6-3, 6-2, dropping three service games in the first set and another to open the second before finding her range and staging her comeback.

Comments
Topics mentioned in this article
Tennis Maria Sharapova Andy Murray Kim Clijsters
Get the latest updates on IPL 2020, check out the IPL Schedule for 2020 and Indian Premier League (IPL) Cricket live score . Like us on Facebook or follow us on Twitter for more sports updates. You can also download the NDTV Cricket app for Android or iOS.