Serena Williams, a 21-time Grand Slam champion, said that like the rest of the sports world, she was "surprised and shocked" to hear the news about Maria Sharapova. 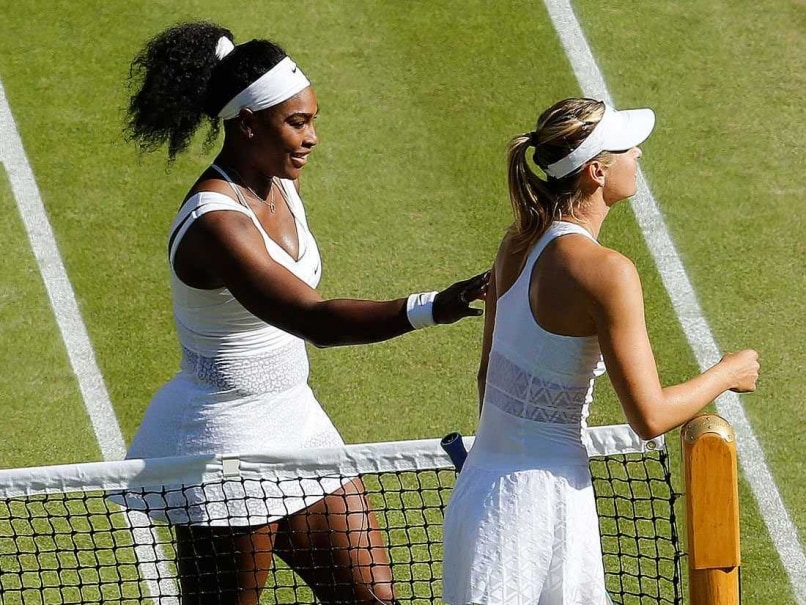 Maria Sharapova and Serena Williams' rivalry is the most closely examined in the sport© AFP
New York:

On Monday, the Russian star revealed she tested positive the day she lost to Williams in the Australian Open quarter-finals in January.

The 21-time Grand Slam champion said that like the rest of the sports world, she was "surprised and shocked" to hear the news about Sharapova.

"I think most people were happy she was upfront and very honest and showed a lot of courage to admit to what she had done and what she had neglected to look at in terms of the list at the end of the year," Williams said. (Sharapova 'Should be Punished', Says Rafael Nadal)

Sharapova announced she tested positive for meldonium, a blood flow-promoting drug she said she had been taking for 10 years for various health issues. Meldonium was banned because it aids oxygen uptake and endurance, and players were notified of the changes in the WADA banned substances list in December. Sharapova claimed she simply neglected to click on the link. (Players Shocked)

She could face a long ban from the International Tennis Federation, possibly ending her season and preventing her from competing at the Olympics.

"It's just taking responsibility, which she admitted that she was willing to do and ready to do," Williams said. "Just hope for the best for everybody in that situation."

Sharapova and Williams have had some barbed words for each other in the past off the court, but on Tuesday, Williams was fully supportive. While Sharapova is one of her biggest rivals based on the Russian's results and five major titles, Williams has dominated the head-to-head series, winning the last 18 meetings over more than a decade.

"As Maria said, she's ready to take full responsibility," Williams said. "She showed a lot of courage and a lot of heart. I think she's always shown courage and heart in everything she's done, and this is no different."

A fellow Nike endorser, Williams declined to comment on the shoe company's decision to suspend its relationship with Sharapova.

"Any time we take any medication, we double, triple and quadruple check, because sometimes even things like cough drops or nasal sprays can be on the list," Wozniacki said. "I think as athletes we always make sure to really make sure there's nothing in it."

Seven-time Grand Slam champion Justine Henin, who was elected to the International Tennis Hall of Fame on Tuesday, said many questions needed to be answered before she could judge Sharapova's case.

"I think we're all a little bit sad and disappointed about the situation," she said on a conference call. "It's never good for the game."

Marat Safin, who on Tuesday became the first Russian elected to the Tennis Hall, agreed, noting that it's not uncommon for players to miss that a substance has been added to the banned list. He said he believed that Sharapova did not intend to cheat, but then quickly added: "I want to believe so."

Comments
Topics mentioned in this article
Serena Williams Maria Sharapova Tennis
Get the latest updates on ICC T20 Worldcup 2022 and CWG 2022 check out the Schedule, Live Score and Medals Tally. Like us on Facebook or follow us on Twitter for more sports updates. You can also download the NDTV Cricket app for Android or iOS.