Serena Williams is aware of Timea Bacsinszky's fighting abilities and says her French Open semi-final against her is hardly going to be a walk in the park. 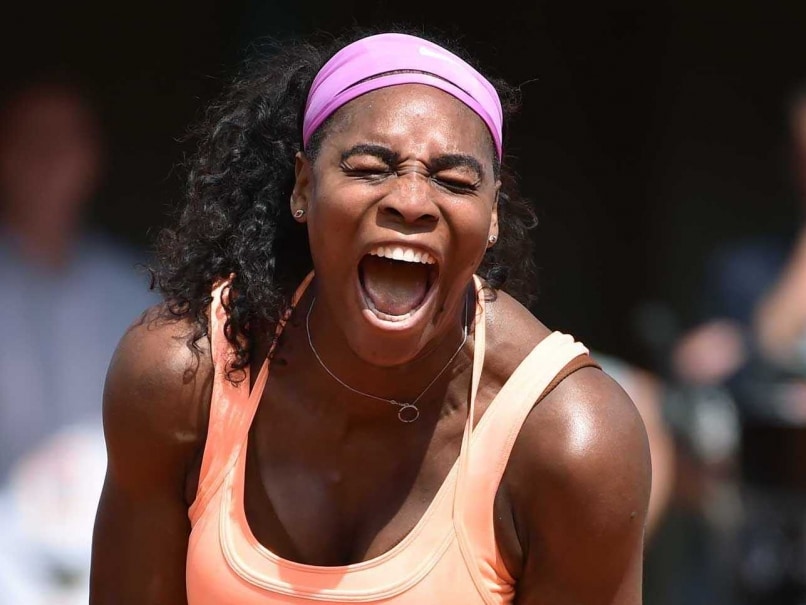 The roar of a champion! Serena Williams has been in superb form in French Open 2015.© AFP
Paris:

Having seen her main rivals fall by the wayside, Serena Williams is the overwhelming favourite to go on and win a third French Open title as she prepares to face Timea Bacsinszky in Thursday's semi-finals.

The 33-year-old American number one seed, who is looking for a 20th Grand Slam title, produced her most powerful performance yet to sweep past Italian 17th seed Sara Errani 6-1, 6-3 in the quarter-finals on Wednesday.

Having lost the first set before going on to win each of her previous three matches, Williams gave Errani, a former finalist at Roland Garros, next to no chance and now she will hope her far greater knowledge of the big occasion gives her the edge against Bacsinszky.

The 23rd seed from Switzerland beat unseeded Belgian Alison Van Uytvanck 6-4, 7-5 to build on her fourth-round victory against Wimbledon champion Petra Kvitova, the fourth seed, and win through to her first Grand Slam semi-final.

"She's a good player. I think most of all about her is she's a major fighter. You can have match point, be up a set, and she's not going to give up," said Williams of a player she has beaten in each of their two previous meetings, including in the quarter-finals at Indian Wells earlier this year.

"She's had a really good year. It's not going to be an easy match at all for me. I need to come out strong again. Most of all I need to relax. If I win, great. If I lose, I want to be able to do the best that I can do. I'm not putting too much pressure on myself."

Williams, the 2002 and 2013 champion in Paris, claims she is "surprised" to still be in the tournament, but it is Bacsinszky who has been the real surprise package this year.

Having slipped out of the top 500 in the world because of injury problems, the 25-year-old daughter of Hungarian parents has fought back to win two titles already this year and now she is the first Swiss woman through to the semi-finals of the French Open since Martina Hingis in 2001.

"You don't get to be playing a semi-final of a Grand Slam every day," said Bacsinszky.

"For me, it doesn't matter who I'm going to be playing against. I just want to have one or two or three tactics and try to put them in the game. If it happens to work, then I'm really happy."

This French Open has also been one to remember for the seventh seed Ana Ivanovic, who will face 13th seed Lucie Safarova of the Czech Republic in the first semi-final on Court Philippe Chatrier on Thursday.

The Serb, supported in Paris by her German World Cup-winning boyfriend Bastian Schweinsteiger, is through to her first Grand Slam semi-final since winning Roland Garros as a 20-year-old in 2008.

"Obviously I'm very, very thrilled to be in the first semi-finals since 2008. It's been a long road and hard work," said Ivanovic, who was also the French Open runner-up in 2007 and the Australian Open finalist in 2008.

"Obviously you know seven years ago it was completely different experience. I was a lot younger and I sort of didn't have the experience. I just was so excited and I felt like, you know, I can achieve anything.

"At that point I had so many victories and so many good results. Maybe I didn't appreciate it as much as I do now."

Ivanovic will not be taking her opponent lightly, though.

Left-hander Safarova, a semi-finalist at Wimbledon last year, has not yet dropped a set and ousted reigning champion Maria Sharapova in the fourth round.

"She's a great player. She showed that many times. She had a great match against Maria. She won Doha beating (Victoria) Azarenka," Ivanovic said of her 28-year-old opponent.

"It's going to be tough match-up for me. She's obviously lefty, gets really lots of balls back very heavy, very aggressive. She's doing great, and she obviously deserves her spot, too."

Comments
Topics mentioned in this article
Serena Williams Timea Bacsinszky Tennis
Get the latest updates on IPL 2021, check out the IPL 2021 Schedule and Indian Premier League Live Score . Like us on Facebook or follow us on Twitter for more sports updates. You can also download the NDTV Cricket app for Android or iOS.