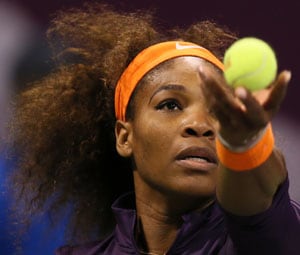 World number one Serena Williams survived a late second set hiccup to move into the quarter-finals of the Swedish Open with a 6-2, 6-3 victory over Georgia's Anna Tatishvili.

The American star remains unbeaten on clay this season after winning 25 straight matches including a perfect run on the way to her second French Open title and 16th Grand Slam singles crown in June.

She now faces 32-year-old Spaniard Lourdes Dominguez Lino who came into the tournament ranked 54 in the world and seeking a third WTA victory, both on clay.

Williams was cruising after sealing the first set and easing into a 5-0 second set lead before wasting three match points and finally closing out the match 6-3.

"I've had a lot of time here but I've actually been spending a lot of time in the room, just staying focused on the event," Williams said.

"My main goal is to do well here. I love this city, but I really love the fans, and I feel like I want to do the best that I can here. I'm staying really focused, Grand Slam style."

Pennetta was 2-0 up in the final set against second seed Simona Halep in their second round match before the Romanian retired injured.

Comments
Topics mentioned in this article
Tennis Anna Tatishvili Sweden
Get the latest Cricket news, check out the India cricket schedule, Cricket live score . Like us on Facebook or follow us on Twitter for more sports updates. You can also download the NDTV Cricket app for Android or iOS.