Williams reached the final without a fight earlier Friday when her semi-final opponent, world No.1 Victoria Azarenka withdrew with a toe injury. 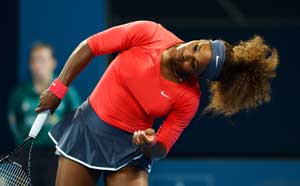 Russia's Anastasia Pavlyuchenkova is to play Serena Williams in the final of the Brisbane International tennis event after defeating Ukraine's Lesia Tsurenko in Friday's semi-final.

Williams reached the final without a fight earlier Friday when her semi-final opponent, world No.1 Victoria Azarenka withdrew with a toe injury.

In the second semi-final, 36th-ranked Pavlyuchenkova came under immediate pressure in a first set that saw five breaks on both sides, but crushed Tsurenko in the second set and decider to win 4-6, 6-1, 6-2.

Saturday's final will be the first for Pavlyuchenkova since she lost to Magdalena Rybarikova in Washington in August, while Williams is in her third straight final after winning the US Open and WTA championships at the end of last season.

Williams has won all three of her previous matches against Pavlyuchenkova, most recently in Madrid in May.

Tsurenko entered the draw as a lucky loser, replacing the injured second seed Maria Sharapova, and defied expectations by knocking out former top-ten player Daniela Hantuchova on the way to her first WTA semi-final.

Comments
Topics mentioned in this article
Tennis Andy Murray Kim Clijsters Victoria Azarenka
Get the latest updates on ICC T20 Worldcup 2022 and CWG 2022 check out the Schedule, Live Score and Medals Tally. Like us on Facebook or follow us on Twitter for more sports updates. You can also download the NDTV Cricket app for Android or iOS.