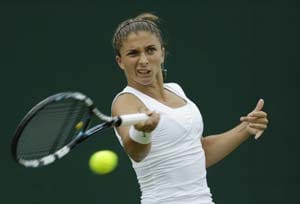 Top-seeded Italians Sara Errani and Roberta Vinci will face each other in the Italiacom Open final after winning their semifinals on Saturday.

The No. 2 seed started badly, but reacted well to cruise through the second set.

The breakthrough came in the fifth game of the final set, when Vinci broke to love following a double fault from Candela. Vinci went on to win the following three games and the match.