Sania Mirza Living up to World No. 1 Tag: Mahesh Bhupathi

World No.1 Sania Mirza won nine titles, including Wimbledon, US Open and the year-ending WTA Finals, with Swiss ace Martina and another with American Bethanie Mattek-Sands this season. 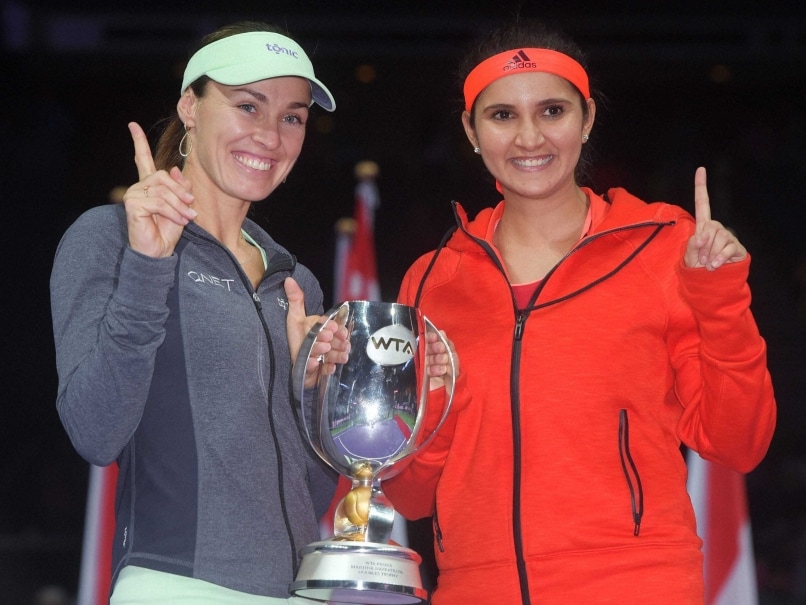 Indian tennis great Mahesh Bhupathi has lauded fellow player and former on-court partner Sania Mirza for her tremendous season this year which saw her clinch 10 women's doubles titles across the globe, including two Grand Slam events.(Hingis and I Complement Each Other Well: Sania)

"Yes, I agree she has been on a roll. She is the World No.1 (in women's doubles) and playing like one. She is playing some great tennis and she has developed a very close partnership with Martina Hingis," Bhupathi told IANS in a telephonic interview from Dubai.(Sania Dreams of Olympic Medal)

"I hope this partnership flourishes even more and they go on to win more tournaments next year. To win 10 tournaments in a year is a great achievement. I wish them continued success."

World No.1 Sania won nine titles, including Wimbledon, US Open and the year-ending WTA Finals, with Swiss ace Martina and another with American Bethanie Mattek-Sands this season.

On his own professional career, Bhupathi still hasn't taken a call. There has been talk of him retiring from the sport but the 41-year-old hasn't confirmed anything yet.

"Right now I am extremely busy and have not really thought about my future. I am just totally focussed on the International Premier Tennis League (IPTL)," said the winner of 12 Grand Slam titles, who is also the director of Sports365.in -- a Bengaluru-based sports driven portal serving as a one-stop shop for all sports and fitness related requirements.

This year too, Bhupathi has played sporadically in only seven tournaments. In all, he played in nine matches, winning two but losing seven!

The first Indian to win a Grand Slam event in 1997, Bhupathi is currently completely focussed on the second edition of the IPTL, to be held from December 2 to 20 in Kobe, Manila, New Delhi, Dubai and Singapore.

"My schedule currently is very hectic. There is a lot that has been going on. The IPTL is on track but we will have to wait and see how it turns out this time and how different it will be from last time. We have Rafael Nadal this time as well as Kei Nishikori playing. Plus we also have another franchise in Japan Warriors," said Bhupathi.

It was recently announced that Bhupathi will partner Sania to play three exhibition matches on November 25, 26 and 27 against the old time famous pair of Leander Paes and Martina Navratilova in Kolkata, Hyderabad and New Delhi.

"It is basically for the promotion of the IPTL. There will be three matches that will be played on back to back days. It is for the fans," concluded Bhupathi.

Comments
Topics mentioned in this article
Sania Mirza Tennis
Get the latest updates on Fifa Worldcup 2022 and check out  Fifa World Cup Schedule, Stats and Live Cricket Score. Like us on Facebook or follow us on Twitter for more sports updates. You can also download the NDTV Cricket app for Android or iOS.