Boris Becker urged Leander Paes, Mahesh Bhupathi and Sania Mirza to team up to take the game forward in India. 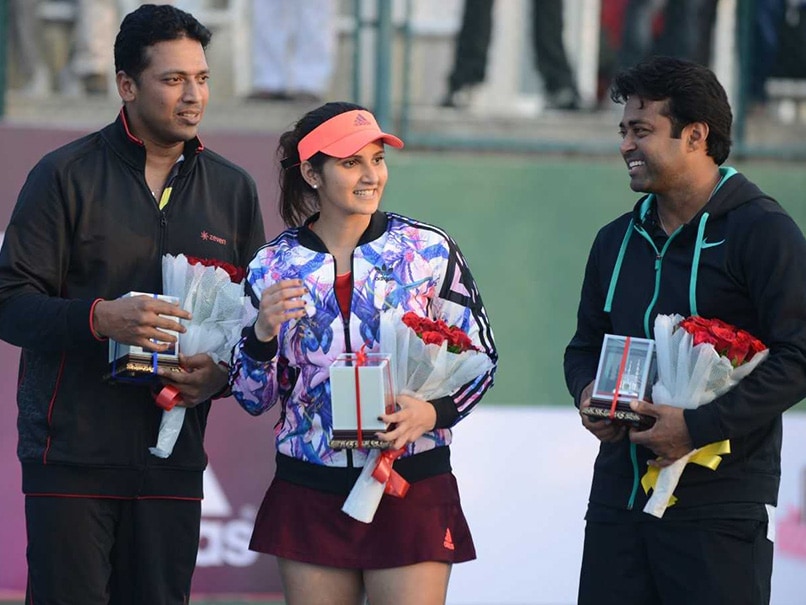 Leander Paes, Mahesh Bhupathi and Sania Mirza have had public spats on many occasions.© AFP

German tennis great Boris Becker heaped praise on Indian tennis players, claiming that the nation has a "long success history in tennis". He also urged the country's top tennis professionals Leander Paes, Mahesh Bhupathi and Sania Mirza to team up to take the game forward in India. "India has a long success history in tennis. You have to have large pool of players, so that some of them go on to win titles. At the moment you don't see them but I would say it is a matter of time," Boris Becker said on Monday.

"Tennis is very popular in India, I know that for a fact. May be the likes of Sania, Bhupathi and Paes need to do something about it. I know they are fighting a little but that is the only solution (to work together)," he added.

Paes, Bhupathi and Mirza have had public spats over choice of doubles partners at multi-sport events in the past.

Last year, Paes had pulled out of the Asian Games, complaining that he did not get a partner of choice for the men's doubles event.

Speaking on the international tennis scene, Becker backed an in-form Novak Djokovic to chase Roger Federer's record 20 Grand Slam titles and said the Serbian's best chance to achieve the feat is in the next two years.

The 31-year-old Djokovic is back to his best after a lean run and has won the last three Grand Slams, including a record seventh crown at the Australian Open last month.

Federer is 37 but is still going strong despite his fourth round loss at Melbourne Park. Seventeen-time Major winner Rafael Nadal too is well and truly back in the mix and reached the final at Melbourne Park after an injury lay-off.

Becker, speaking ahead of the Laureus World Sports Awards on Monday night, said equalling Federer's tally of 20 Grand Slams is now in the realm of possibility.

"One of the misfortunes of playing in an era with Federer and Nadal is you can't really compare yourself to them. Normally, after 15 Grand Slams and seven Australian Open titles, you would say 'wow'.

"It is wow but the next question is 'will Novak ever break Federer's record?" said Becker, who coached the world number one to six Grand Slam victories between 2014-2016.

"The short answer is that there is a possibility (of Novak getting close to Federer's 20 titles) but a lot of things have to happen. Yes he won the last three majors but before that he had a two year dry spot."

Following his split with Djokovic, Becker had questioned the Serbian's work ethic. "Tennis is fickle and sensitive. Lot of things have to be right in your personal and private life. For Novak, it is perfect at the moment. Therefore he is on his way (to match Federer's feats) and hopefully nothing happens in the meantime," said the German, who himself won six Majors.

Comments
Topics mentioned in this article
Sania Mirza Leander Paes Mahesh Bhupathi Tennis
Get the latest updates on ICC Women's Cricket World Cup 2022 and IPL 2022, check out the Schedule , Live Score and IPL Points Table. Like us on Facebook or follow us on Twitter for more sports updates. You can also download the NDTV Cricket app for Android or iOS.