While Sania and Cara Black lost 1-6 6-3 7-10 against the unseeded Taipei pair of Hao-Ching Chan and Yung-Jan Chan in the quarterfinals, Paes, who had partnered with Aisam-ul-Haq Qureshi, lost 3-6 4-6 to Treat Huey of Philippines and Briton Dominic Inglot.. 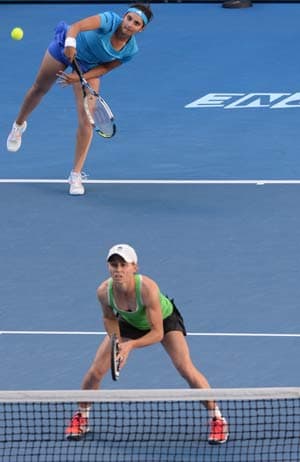 Sania Mirza and Cara Black will now focus on a better campaign in the Wimbledon. (File Photo)

India's challenge ended at the Aegon International, the last tournament in the lead up to Wimbledon, with the defeats of Sania Mirza and Leander Paes in their respective events.

In the women's doubles, third seeded pair of Sania and Cara Black recovered from a first set rout but ended up losing 1-6 6-3 7-10 against the unseeded Taipei pair of Hao-Ching Chan and Yung-Jan Chan in the quarterfinals.

Paes, who had partnered with Aisam-ul-Haq Qureshi, also lost at the quarterfinal stage in the men's event.

Sania and Cara have been seeded fourth while Paes and Radek Stepanek are seeded fifth in the men's doubles.

Bopanna and Qureshi are seeded eighth.

Comments
Topics mentioned in this article
Sania Mirza Leander Paes Aisam-Ul-Haq Qureshi Tennis
Get the latest updates on IPL 2020, check out the IPL Schedule for 2020 and Indian Premier League (IPL) Cricket live score . Like us on Facebook or follow us on Twitter for more sports updates. You can also download the NDTV Cricket app for Android or iOS.