The Indian star has had to deal with several partners pulling out with injuries. 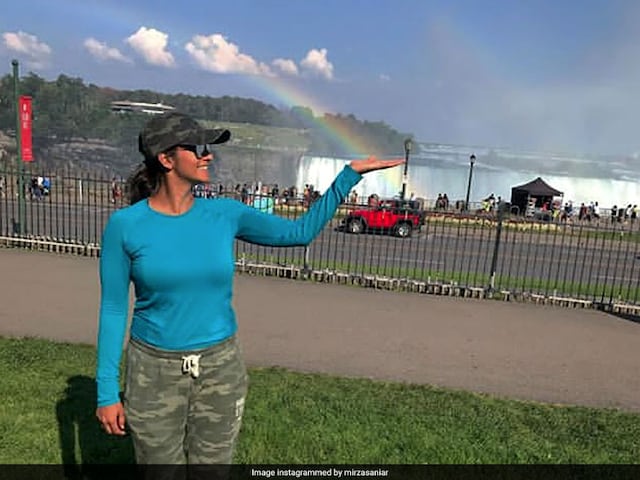 Sania Mirza's recent run with doubles partners has been tiresome as they have all been dropping out due to various injuries. Sania paired with Yaroslava Shvedova in April, but the Kazakhstan player underwent ankle surgery. Then, Belgian partner Kristen Flipkens injured her shoulder in Eastbourne which put Sania's Wimbledon participation in jeopardy. In Birmingham, Coco Vandeweghe was forced to retire due to injury. The latest to join the bandwagon is Shuai Peng. The Chinese player hurt her knee and thus the fourth-seeded pair had to give a walkover in the quarterfinals of the Rogers Cup in Toronto.

But, Sania is not letting such matters bog her down. She put up a picture on Instagram where she's posing with a rainbow in the background at the Niagara Falls.

"Everyone wants happiness, no one wants pain.. But you can't have a rainbow without a little bit of rain," wrote the Indian doubles star.

Everyone wants happiness, no one wants pain.. But you can't have a rainbow without a little bit of rain

Apparently she wasn't going to go to see the natural wonder but later changed her mind and loved it. "Beauty at its best... #cantbelieveialmostdidnotgo" she wrote in another post.

Beauty at its best #cantbelieveialmostdidnotgo

Sania is starting out the hardcourt season and will be heading to Cincinnati next week. The season culminates at the US Open in New York at the end of the month.

She has won just one tournament this season so far in Brisbane and has dropped to No 7 in the rankings. The former world No 1 recently held a WTA Future Stars event in her academy in Hyderabad where youngsters got tips from the tennis superstar.