Sania Mirza and Bethanie Mattek-Sands knocked out of Madrid Open

The fifth seed Indo-American pair lost 5-7 1-6 to the unseeded Russian-Czech pair in one hour and 10 minutes in the second round of the euro 4,033,254 clay court event. 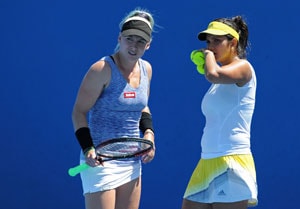 Sania Mirza and her American pair Bethanie Mattek-Sands made an early exit from the Madrid Open after losing their second round match in straight sets to Anastasia Pavlyuchenkova and Lucie Safarova.

The fifth seed Indo-American pair lost 5-7 1-6 to the unseeded Russian-Czech pair in one hour and 10 minutes in the second round of the euro 4,033,254 clay court event.

Sania and Bethanie could convert just two of the eighth break chances they had against their rivals while dropped their serve on six occasions.

Sania and her partner shared 12,000 euro as prize money and earned 140 ranking points each.

Before the next Grand Slam of the season, the French Open, Sania and Bethanie have two more tournaments -- Rome and Brussels -- to tune up their game on the red clay.

The Roland Garros is slated to begin from May 26.

Comments
Topics mentioned in this article
Tennis Leander Paes Roger Federer Mark Knowles Mahesh Bhupathi Rafael Nadal Caroline Wozniacki Samantha Stosur Bethanie Mattek-Sands Sania Mirza Novak Djokovic Lukas Dlouhy
Get the latest updates on India vs Australia Series, check out the India vs Australia Schedule for 2020-21 and Ind vs Aus live score . Like us on Facebook or follow us on Twitter for more sports updates. You can also download the NDTV Cricket app for Android or iOS.