Sania in main draw of the Miami WTA Premier event 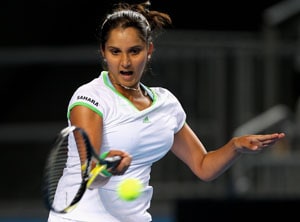 The 19th seed Indian beat the eighth seed and world number 89 opponent 6-4, 6-2 in the second final round of the qualifying event of the hard court tournament.

Ranked 99 in WTA charts, Sania has drawn Spain's Arantxa Parra Santonja as her first round rival, who is placed 37 spots above the Indian.

If Sania manages to clear first hurdle, she will be up against the 24th seed Russian Maria Kirilinko, who got a bye in the first round.

It will be the second successive Premier WTA event for Sania after losing in the second round at the Indian Wells.

Comments
Topics mentioned in this article
Tennis Andy Roddick Lukas Dlouhy Rohan Bopanna Leander Paes Aisam-Ul-Haq Qureshi Maria Sharapova Sania Mirza Kim Clijsters Venus Williams
Get the latest updates on ICC T20 Worldcup 2022 and CWG 2022 check out the Schedule, Live Score and Medals Tally. Like us on Facebook or follow us on Twitter for more sports updates. You can also download the NDTV Cricket app for Android or iOS.