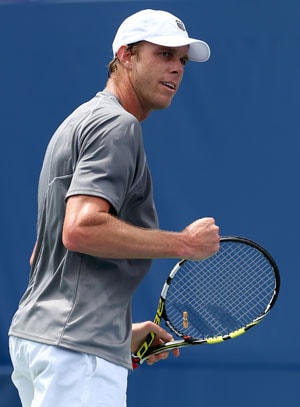 American Sam Querrey stepped up his rivalry with countryman John Isner on Wednesday, blasting 19 aces to reach the quarter-finals of the ATP Winston-Salem Open.

Home-state hero Isner and Querrey have long been friendly rivals, with both standing over two meters tall and relying on huge serving games.

Isner was the top seed and two-time defending champion at Winston-Salem, but he and third seed Tomas Berdych withdrew, citing injury concerns a week ahead of the start of the US Open.

Querrey, 25, reached the semi-finals here a year ago, losing to eventual finalist Berdych. He won his 21st match of the season, with his best showing an Auckland semi-final nearly nine months ago, and says he has his chances with the pair of major seeds missing.

"Two big kind of power guys are out. You want to take it one match at a time, but it's hard not to know that in the back of my mind that, 'Hey, I have got a good opportunity here,'" said Querrey, who is ranked no. 29.

Querrey, who had won just two matches over five ATP events from the end of the French Open until this week, hopes to kick-start his hardcourt season in time for the US Open.

"This is huge for my confidence," said Querrey, who came from 6-3 down in the deciding tiebreak.

"It's the first time in a long while I can remember squeezing out a long tough one, saving match points, getting through when it wasn't pretty at times.

"I felt better in this match than the first one and tomorrow I am hoping I'll feel a bit better."

Querrey will bid for the semi-finals against Ricardas Berankis of Lithuania, who defeated Roberto Bautista Agut 6-3, 6-3.

That match will be a re-run of the 2012 Los Angeles final, claimed by Querrey over the number 126, who has won three consecutive matches for the first time this season.

Frenchman Gael Monfils, who is seeded 15th, extended his recovery from this month's ankle injury by beating Spanish fourth seed Tommy Robredo 7-6 (7/2), 4-6, 6-2 in a match that lasted over two hours.

Comments
Topics mentioned in this article
John Isner Jarkko Nieminen Tennis
Get the latest updates on IPL 2020, check out the IPL Schedule for 2020 and Indian Premier League (IPL) Cricket live score . Like us on Facebook or follow us on Twitter for more sports updates. You can also download the NDTV Cricket app for Android or iOS.