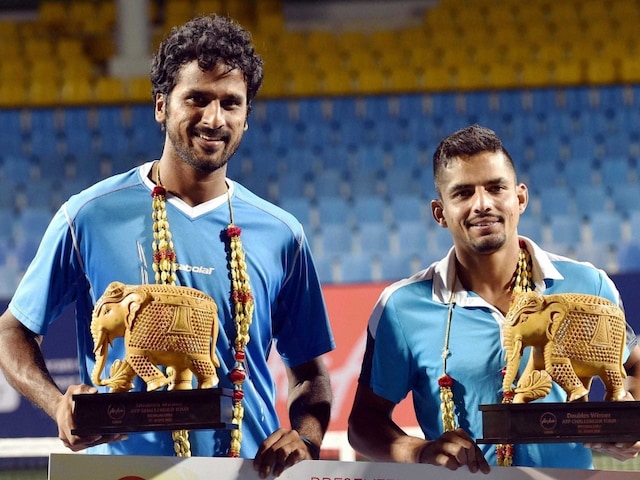 Saketh Myneni and Sanam Singh with their trophies.© PTI
Bengaluru:

The second seeds lost the first set after being broken in the 11th game and the unseeded pair served out for the set. However, Saketh and Sanam raised the level of their games and despite the opponents trading service games early, held sway over their opponents.

With John and Vijay serving to stay in the set, some brilliant returns and volleys by the opposition saw the unseeded pair facing two break points.

They saved one but Saketh and Sanam combined to convert the second to pocket the set.

The Super-tie-breaker saw the second seeds racing away to a 4-1 lead which they kept stretching, allowing them just one point more to pocket the winner's cheque of $3100. John and Vijay had to be content with the finalist's purse of $1800.

In the title showdown, Adrian will take on second seed James Ward of Britain, who rallied from a set deficit to quell the challenge of unseeded American Daniel Nguyen 4-6, 6-4, 6-3.

Comments
Topics mentioned in this article
Sanam Singh Saketh Myneni Tennis
Get the latest Cricket news, check out the India cricket schedule, Cricket live score . Like us on Facebook or follow us on Twitter for more sports updates. You can also download the NDTV Cricket app for Android or iOS.