American Ryan Sweeting launched his title defence at the US Men's Clay Court Championship on Tuesday with a 6-3, 7-6 (8/6) victory over Brazilian qualifier Ricardo Mello. 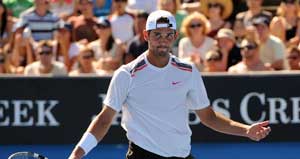 American Ryan Sweeting launched his title defence at the US Men's Clay Court Championship on Tuesday with a 6-3, 7-6 (8/6) victory over Brazilian qualifier Ricardo Mello.

Sweeting, trailing 5-6 in the second set, saved two set points against his serve as he held on to force the tie-breaker, sealing the victory on his fourth match point.

In other matches at the Houston tournament, Tatsuma Ito won an all-Japanese clash with Go Soeda 6-4, 7-5, the first tour-level meeting between the two compatriots.

He has also beaten world number one Novak Djokovic this year, in the semi-finals of the hard-court Indian Wells Masters.

"I'm a much more confident player," said Isner, who flew in late to Houston and is to open his campaign on Thursday after enjoying a first-round bye.

"To be able to compete in this game you have to be confident, and that's what I have on my side right now."

In the second round, Fish will face American Michael Russell, a Houston resident who rallied from a set and a break down for a 2-6, 7-5, 6-1 win over Spain's Daniel Gimeno-Traver.