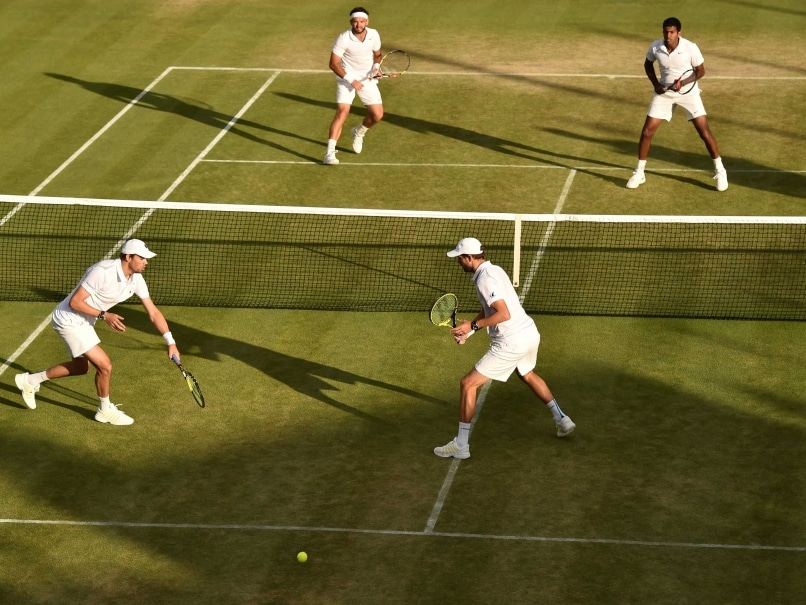 Rohan Bopanna and Florin Mergea knocked out the top seeded and legendary American twins Mike and Bob Bryan to storm into the men's doubles semifinals of the Wimbledon championships.

The ninth seeded Indo-Romanian rallied to shock the three-time champions 5-7, 6-4, 7-6(9), 7-6(5) in the quarterfinals, in which engrossing tennis was played for two hours and 34 minutes. (Paes-Hingis Advance to Wimbledon Quarters)

Bopanna and Mergea hit 31 winners, 17 of which were aces, and saved three of the five break points they faced in the match. They next face fourth seeds Jean-Julien Rojer and Horia Tecau, who overcame seventh seeds Marcin Matkowski and Nenad Zimonjic 6-4, 6-3, 7-6(2) in the other quarterfinal. (Sania Mirza Battles Hard to Reach Mixed Doubles Quarters)

India's singles challenge ended in the junior singles championships with the defeat of 15th seed Pranjala Yadlapalli. She lost 2-6, 3-6 to American Michaela Gordon in the girls singles second round.

There was something to cheer though in the boys doubles as Sumit Nagal and his Vietnamese partner Nam Hoang Ly advanced to the second round with 6-4 7-5 win over Alex De Minaur of Australia and Yosuke Watanuki of Japan.

Comments
Topics mentioned in this article
Rohan Bopanna Florin Mergea Bob Bryan Mike Bryan Tennis
Get the latest updates on India vs Australia Series, check out the India vs Australia Schedule for 2020-21 and Ind vs Aus live score . Like us on Facebook or follow us on Twitter for more sports updates. You can also download the NDTV Cricket app for Android or iOS.