In the WTA event, being run simultaneously, Sania Mirza and Shuai Peng have reached the semifinals with a 6-3 6-7(1) 10-3 win over Irina-Camelia Begu and Raluca Olaru. 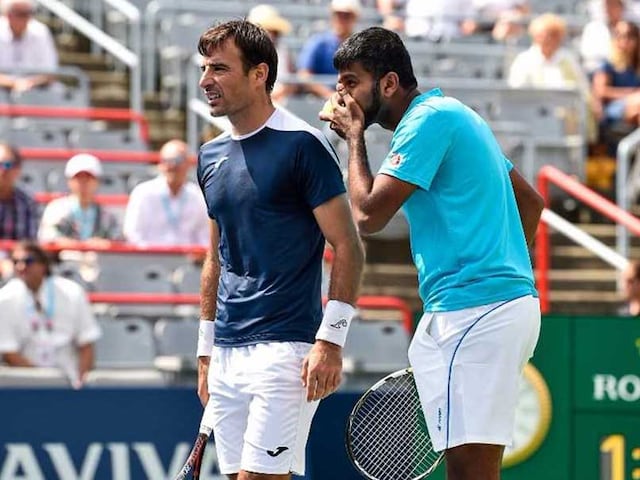 Rohan Bopanna and his Croatian partner Ivan Dodig reached the quarterfinals of the Cincinnati Masters after edging past Juan Sebastian Cabal and Fabio Fognini in a tight contest. The seventh seeds Bopanna and Dodig, who ended finalists at the Rogers Cup last week in Montreal, rallied to humble the Colombian-Italian combo 5-7 7-5 10-8 in a second round match.

In the WTA event, being run simultaneously, Sania Mirza and Shuai Peng have reached the semifinals with a 6-3 6-7(1) 10-3 win over Irina-Camelia Begu and Raluca Olaru.

In their fiercely fought match, which lasted one hour and 41 minutes, Bopanna and Dodig broke their rivals once but also dropped serve one time.

To Cabal and Fognini's credit, they saved as many as seven breakpoints to make it as tough for Bopanna and Dodig as possible.

Bopanna is the only Indian left in the tournaments after Ramkumar Ramanathan's second round defeat in the singles and Leander Paes' first round defeat with Alexander Zverev in the doubles first round.

Comments
Topics mentioned in this article
Rohan Bopanna Ivan Dodig Sania Mirza Shuai Peng Tennis
Get the latest Cricket news, check out the India cricket schedule, Cricket live score . Like us on Facebook or follow us on Twitter for more sports updates. You can also download the NDTV Cricket app for Android or iOS.