Rohan Bopanna and Daniel Nestor overcame second-seeded combination of Jean-Julien Rojer from the Netherlands and Horea Tecau from Romania 4-6 7-6(9) 11-9 in a nerve-wrecking semifinal of the USD 2,503,810 hard court event. 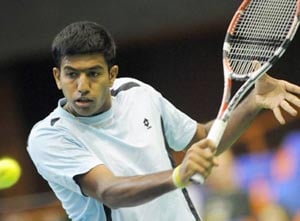 A file photo of Rohan Bopanna.

Rohan Bopanna and his partner Daniel Nestor set themselves up for their second title of the season by reaching the final of the Dubai Duty Free Championships, here on Friday.

The fourth-seeded Indo-Canadian combo overcame second-seeded combination of Jean-Julien Rojer from the Netherlands and Horea Tecau from Romania 4-6 7-6(9) 11-9 in a nerve-wrecking semifinal of the USD 2,503,810 hard court event.

Bopanna and Nestor had two chances to break the second seeds in the opening set but they could not convert those even as they dropped serve one time to let Rojer and Tecau run away with the lead.

The fourth seeds gave their all in the second set to draw parity and finally prevailed in the tense contest through the Match Tie break.

Comments
Topics mentioned in this article
Rohan Bopanna Daniel Nestor Tennis
Get the latest Cricket news, check out the India cricket schedule, Cricket live score . Like us on Facebook or follow us on Twitter for more sports updates. You can also download the NDTV Cricket app for Android or iOS.