Rohan Bopanna and Aisam-ul-haq Quershi began their ATP World Tour Finals campaign with a defeat against Daniel Nestor and Max Mirnyi, albeit after a good fight in a group B match, on Sunday. 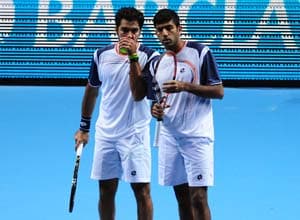 Rohan Bopanna and Aisam-ul-haq Quershi began their ATP World Tour Finals campaign with a defeat against Daniel Nestor and Max Mirnyi, albeit after a good fight in a group B match, on Sunday.

Bopanna and Qureshi will now have to win the remaining two matches in their group to be in contention for a spot in the semifinals.

The Indo-Pak duo even had a set point in the 10th game of the first set but squandered the opportunity. It had, however, been a good comeback as they were down 2-4 at one stage but won three games on the trot to take a mini 5-4 lead.

After they missed out on converting that set point, the experienced pair of Nestor and Mirnyi cashed in on the mistake of their young rivals and nosed ahead by prevailing in the tie-breaker.

Bopanna and Qureshi came back well in the second set and broke their rivals early, apart from saving three breakpoints, and drew parity in the match.

In the Super tie-breaker they were ahead 6-3 but could not hold on to the lead. Qureshi fired an ace when they faced the first match point but could not save the second one.

The Indian Express of Leander Paes and Mahesh Bhupathi will compete in group A. The top two teams in each group will make the semifinals.

Comments
Topics mentioned in this article
Rajeev Ram Rohan Bopanna Su-Wei Hsieh Aisam-Ul-Haq Qureshi Daniel Nestor Tennis Max Mirnyi
Get the latest Cricket news, check out the India cricket schedule, Cricket live score . Like us on Facebook or follow us on Twitter for more sports updates. You can also download the NDTV Cricket app for Android or iOS.