World number two Roger Federer says he had the time of his life at a recent exhibition event in Brazil but toned down hopes that South America will soon bag any of the big tournaments. 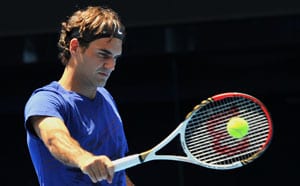 World number two Roger Federer says he had the time of his life at a recent exhibition event in Brazil but toned down hopes that South America will soon bag any of the big tournaments.

The continent was buoyed by a decision in December to include the Colombian capital Bogota on the 2013 men's schedule, joining San Jose, Sao Paulo and Buenos Aires in hosting low-level events.

With Rio de Janeiro holding the 2016 Olympics and the 2014 football World Cup also in Brazil, the focus of the sporting world is turning on the continent.

But Federer said it may have to bide its time to get the World Tour Finals or one of the nine Masters 1000 events.

"I was deeply impressed by the atmosphere, by the love for the game, for the appreciation they showed for me showing up," he said, referring to the exhibition he played in Sao Paulo in December.

"They made it one of the most fascinating trips of my life to South America. So, of course, I'd hope to go there more often in the future."

But he cautioned about the continent getting its hopes up too high, too soon.

"Who knows, maybe they'll get the World Tour Finals eventually. It's not easy to get a Masters 1000," he said.

"It needs to make sense. Don't forget, if you add one, you almost have to take another one away. Who deserves to have one taken away from them?

"It needs to be thought through thoroughly or you just add one. Then again, maybe other places also deserve one. I don't think it's right now on the agenda.

"I think South America are happy the way things are right now, they would like some minor improvements. That's all they care about.

"They just got Bogota, as well, which I think is a good thing. But we'll discuss more about those kind of things in the future, I'm sure. It's going to be interesting."

Comments
Topics mentioned in this article
Tennis Roger Federer Stanislas Wawrinka Rafael Nadal David Ferrer Andy Murray Novak Djokovic Bernard Tomic
Get the latest updates on ICC T20 Worldcup 2022 and CWG 2022 check out the Schedule, Live Score and Medals Tally. Like us on Facebook or follow us on Twitter for more sports updates. You can also download the NDTV Cricket app for Android or iOS.