Roger Federer survives scare to enter Round 2 in Dubai meet

When Federer found a couple of extra gears, taking the next two sets in less than three-quarters of an hour, a 5-7, 6-0, 6-2 win brought him prolonged applause as well. 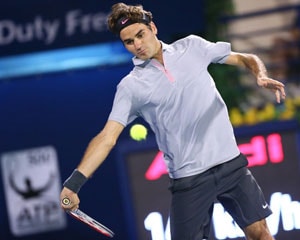 Roger Federer seemed to have talked his way into a scare before beginning an up-and-down defence of his Dubai Open title with a recovery against an opponent even more popular than himself on Monday.

The Grand Slam record-holder had said before the match that often took him a while to suss out players he had never previously played - and sure enough he ran into trouble against the best player in the Arab world, Malek Jaziri, dropping the first set to loud cheers.

When Federer found a couple of extra gears, taking the next two sets in less than three-quarters of an hour, a 5-7, 6-0, 6-2 win brought him prolonged applause as well.

But the outcome brought a definite sense of premonition with it.

"People might think, okay he's a wild card, so it's an easy draw," Federer had said."

I think it's tricky, because I don't know exactly his pattern, his favourite shots, all those things.

"It's always a big match here in the Middle East playing someone like him. And first rounds always create pressure as I'm the defending champion and I want to start well. So it's not a simple match for me."

Neverthless some of this was dramatically improbable.

The unfamiliar one had not played a match for more than three months because of a knee injury, and was ranked outside the top 100, only getting into the tournament with a wild card.

But Jaziri has talent and attitude. The Tunisian blitzed his first serve at 135 mph, and played with the dangerous freedom of an underdog pleased just to get a bite or two into the big man's trouser-leg.

There were also other pressures on Federer, which he described with a mixture of honesty and a nicely bizarre sense of humour.

"I also think that it played on my mind, you know, that he has this huge knee brace, and a tape, not having played this year," he said, with a crazy chortle. "Gott win - right?"

Federer finished with some great serving statistics, several searing forehands, and a few nimble sideways scrambles which belied his status as the oldest player in the top ten.

Earlier he even half-admitted that he is past his prime, having stated that this would be between the ages of 23 and 27 for most players. When he was then asked if he was past his prime, his immediate reaction was laughter.

"It depends," he said, buying time to think.

"I think I'm playing excellent tennis. But if you look back historically I think that's usually when you're supposed to be playing your best.

"But then of course there are exceptions. There are guys who win Grand Slams at 16 and some win them at 34. So it depends on how you see things.

"Right now even the over-30 guys are consistent on tour. It's nice to see them hanging in there."

However both by words and deeds Federer managed to convince that he is nowhere near ready for retirement. He next plays the winner of an all-Spanish tussle between Marcel Granollers and Albert Montanes, ranked 34 and 89 respectively.

His main rival, Novak Djokovic, the world number one who is attempting to win the title back from him, begins Tuesday against Viktor Troicki, a long-time close friend since the days when they were brought up together in Belgrade.

Mikhail Youzhny, Daniel Brands, Lukas Rosol, Andreas Seppi and Somdev Devvarman were the other Round 1 winners on Monday.