Roger Federer relishes being the centre of attention

Roger Federer admits he relishes stealing the spotlight at the ATP Tour Finals, after the world number two enjoyed huge support from the British crowd during his semi-final victory over Andy Murray on Sunday. 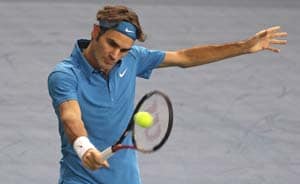 Roger Federer admits he relishes stealing the spotlight at the ATP Tour Finals, after the world number two enjoyed huge support from the British crowd during his semi-final victory over Andy Murray on Sunday.

While British number one Murray was supposed to be the home fans' favourite at the season-ending event, it was Federer who raised the biggest cheers from the O2 Arena audience in south-east London as the defending champion cruised to a 7-6 (7/5), 6-2 win that set up a final showdown with Novak Djokovic.

Federer has long been popular with fans in the UK after enjoying so much success at Wimbledon.

And the 31-year-old insists he wasn't surprised with the level of backing he received when taking on Murray.

"We have played here twice before and both times the crowds were amazing, electric and sometimes even in my favour," Federer said.

"You can't expect them all to be cheering for you if you're playing Andy Murray here in his country. But I do respect their support and don't take it for granted. It's very special.

"I do have amazing crowd support all around the world, not just here in England where I probably achieved some of the greatest moments in my life.

"I always get a lot of support. It's been a long time since I didn't get any support, let's put it that way. I don't remember the last time.

"I guess I've been in the game for so long, I do have many people who just enjoy watching me play or feel like it's a throwback to the times when they used to play with one-handed backhands, and they like me because of those things."

Federer now faces world number one Djokovic in the final match of the season as he tries to complete a hat-trick of Tour Finals titles.

Djokovic is the only unbeaten player in this year's tournament with four successive wins and Federer is looking forward to the challenge of ending that run.

"Yeah it's exciting," the 17-time Grand Slam champion said. "There's no doubt about it, I love playing Novak.

"He's had a great year and a great tournament. He played another good match today against Juan Martin (del Potro) who had him on the ropes, so credit to him for coming back to win.

"I think it's pretty straightforward. We've got to press out the last juice from our bodies and make it a successful end to the year.

"It's a big opportunity playing the last match of the season and facing off against Novak is always special, especially here at the Tour Finals."

Comments
Topics mentioned in this article
Tennis Andy Murray Rafael Nadal Roger Federer David Ferrer Novak Djokovic Bernard Tomic Stanislas Wawrinka
Get the latest Cricket news, check out the India cricket schedule, Cricket live score . Like us on Facebook or follow us on Twitter for more sports updates. You can also download the NDTV Cricket app for Android or iOS.