The tame 6-3, 6-4 defeat for the ninth seed deals a heavy blow to his hopes of reaching next month's World Tour Finals in London, which feature the season's top eight players. Gasquet is currently ninth in the Race to London. 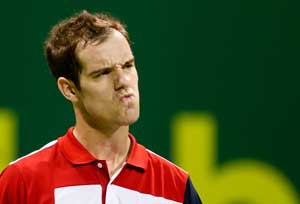 Frenchman Richard Gasquet became the first high-profile casualty at the Shanghai Masters on Tuesday, losing his first-round encounter to Vasek Pospisil as organisers scrambled to keep the storm-hit tournament on track.

The tame 6-3, 6-4 defeat for the ninth seed deals a heavy blow to his hopes of reaching next month's World Tour Finals in London, which feature the season's top eight players. Gasquet is currently ninth in the Race to London.

Canada's Pospisil, ranked 43rd in the world, broke Gasquet in the fourth game of the first set and again at the start of the second in a match lasting 69 minutes, with the Frenchman unable to earn a single break point.

Persistent rain -- the lingering effects of Typhoon Fitow -- forced matches onto indoor courts at the Qizhong Tennis Center, with tournament chiefs attempting to make up for lost match time the previous day.

The wet weather meant a number of changes to the schedule throughout the day, with doubles matches postponed in an effort to complete all the first round matches before the likes of Novak Djokovic and Rafael Nadal make their entrance.

Veteran Lleyton Hewitt lost 6-4, 6-2 to Andreas Seppi, missing the chance for a second round match-up against old rival Roger Federer.

Hewitt, 32, who has slipped out of the world's top 50, started strongly, breaking at the first opportunity and taking a 3-0 lead. But Seppi withstood the charge, winning five games in a row to seize the initiative.

The Australian wildcard showed only occasional glimpses of his fighting ability as world number 22 Seppi cut down on his error count and broke Hewitt twice at the start of the second set.

"He played a lot better," said Hewitt. "He hardly missed a ball after the first three games. I had chances to go up four-love. From then on, he played really well. He served better than I've seen him serve before."

"I served in patches. Probably when I was down breakpoints and stuff, I didn't get enough first serves in," added Hewitt. "He's such a tough player to play when the ball is on his terms."

The top eight seeds -- including Federer, seeded five -- all have a bye into the second round.