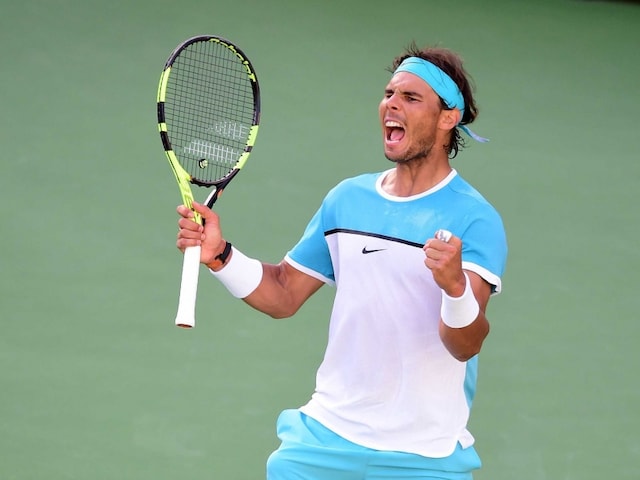 Rafael Nadal saved five set points to finish off a two-set victory over Fernando Verdasco 6-0, 7-6 (11-9) on Tuesday in the third round at Indian Wells. (Click here for latest Tennis stories)

Nadal, the nine-time French Open champion who turns 30 in June, avenged his first-round loss to fellow Spaniard Verdasco at the Australian Open in January.

He moved a step closer to a fourth trophy in the California desert, where he took the title of the hardcourt ATP and WTA event in 2013, 2009 and 2007.

Nadal roared through the first set without dropping a game, but Verdasco came to life in the second, eventually forcing it to a tiebreaker.

Nadal fought off five set points before clinching it when Verdasco hit a backhand long to end the one hour, 41 minute third round match.

"It was a tough match, but I resisted," Nadal said. "I lost a few matches this year that I had a chance to win so I need to play more matches like this."

Nadal improved to 15-3 overall against Verdasco but they have had some memorable contests since their first encounter in 2005 in Doha.

They played a brilliant three tiebreaker match at Cincinnati in 2011, went five sets in the semis of the 2009 Australian Open and earlier this year they played another five setter in Melbourne with Verdasco handing Nadal just his second ever first-round defeat in a Grand Slam.

"I thought I was patient today," Nishikori said. "Obviously, it's not easy. But I played some good tennis. So I'm looking forward to my next match."

Comments
Topics mentioned in this article
Rafael Nadal Fernando Verdasco Tennis
Get the latest Cricket news, check out the India cricket schedule, Cricket live score . Like us on Facebook or follow us on Twitter for more sports updates. You can also download the NDTV Cricket app for Android or iOS.