Rafael Nadal through but Victoria Azarenka out of Madrid

Earlier, last year's finalist and sixth seed Tomas Berdych stayed on course for a quarter-final meeting with Andy Murray as he recovered from a set down against Jerzy Janowicz to win 6-7, 6-3, 6-2. 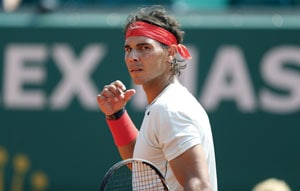 Rafael Nadal made a comfortable start to his quest for a third Madrid Masters title on Wednesday as he eased past Frenchman Benoit Paire 6-3, 6-4.

One break in each set was enough for Nadal as he overcame some impressive variety and touch shown by Paire early on to break when the World No.37 was serving at 2-3 down in the opening set, before eventually sealing it 6-3.

Paire had his only look at a break point on the Nadal serve early in the second set but couldn't take advantage, and in typical Nadal fashion he upped the pressure to break at 4-4 before serving out to book his place against either Nicolas Almagro or Mikhail Youzhny in round three.

Earlier, last year's finalist and sixth seed Tomas Berdych stayed on course for a quarter-final meeting with Andy Murray as he recovered from a set down against Jerzy Janowicz to win 6-7, 6-3, 6-2.

Japanese 14th seed Kei Nishikori will face Roger Federer in the third round after he beat Victor Troicki 7-5, 6-2.

On the women's side there was a big upset as World No.3 Victoria Azarenka crashed out to Russian Ekaterina Makarova 1-6, 6-2, 6-3.

Azarenka had looked as if she would cruise into the last-16 early on as she dominated the world No.24 in the first set.

However, Makarova turned the match on its head in the second set as she broke early on and again with Azarenka serving at 2-5 to force the match into a decider.

There were even more twists and turns in the third as Azarenka again appeared to take control as she surged into a 2-0 lead, but the double Australian Open champion then fell to pieces with a string of unforced errors that allowed Makarova back onto level terms at 3-3.

Azarenka was then unhappy when she was docked a point by the umpire for smashing her racket in the next game as Makarova moved ahead for the first time in the set.

Makarova broke the former World No.1 to serve for the match and Azarenka barely even made the Russian earn it in the final game as she sailed well long three times to bow out with a whimper.

Azarenka blamed her exit on a lack of match-practice due to an injury that had kept her out for two months.

"I think it was really noticeable. I made mistakes that I don't normally do, but that's what comes after not playing for a long time," she told a press conference.

"I still have another tournament before the French Open to compete in, and I'm going to go back on the practice court as I always do and work hard to improve."