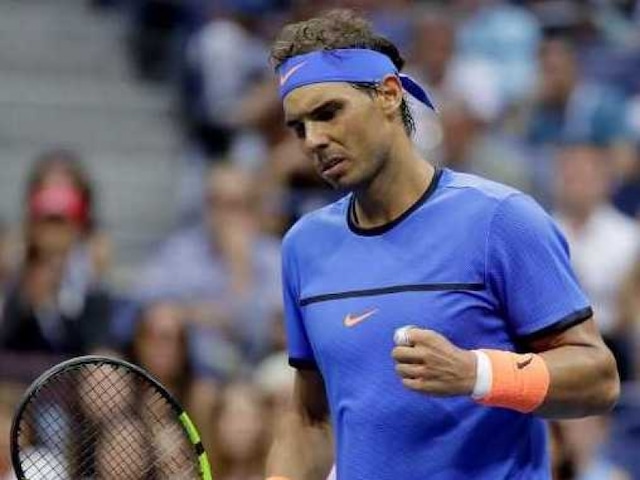 Rafael Nadal said a team like Spain should have been in Davis Cup World Group.© AFP

The pain of not living up to the favourites tag in the previous ties still rankles the Spanish Davis Cup team as Rafael Nadal said "special things" can happen for Indian players in the World Group play-off tie.

It's a complete mismatch with Spain boasting world-class performers in this tie against an Indian side which does not have a single player in top-100. The Spanish team showed utmost respect to their opponents, showing how true champions should be and there was no trace of arrogance. "The Indian players will play in front of their crowd with conditions they chose. And in Davis Cup, special things can happen. It has happened in the past. We lost a couple of confrontations (contest) that we believed we were favourites and were in good position. There is respect for India, they have good players, good double team," Nadal said at the pre-draw press conference on Tuesday.

"Few times we have the opportunity to get back to the World Group, we didn't (win). Hope this time it can change. Team like Spain should be in World Group," he said lamenting the lack of success. Nadal was clearly referring to their 1-3 defeat in the World Group Play-off against Brazil in 2014 and 2-3 loss to Russia in the Europe/Africa Group last year. Before that they had lost to Germany in World Group first round to find themselves in the Group competition. Spain had not fielded their A team in those ties with neither Nadal nor Ferrer featuring in the contests.

He has been crucial in Spain's victorious Davis Cup campaigns in the past (2004, 2008, 2009 and 2011). World number 13 David Ferrer said he was not sure if he will be fielded on the opening day but he too spoke of the uncertainty factor in Davis Cup. "In Davis Cup, we are the favourites due to ranking but we are playing in India with different conditions. I will give my best and play a good match," Ferrer, winner of 26 singles titles, said.

"It's an important tie. It's difficult tie, it's good for us to have have Nadal and Feliciano Lopez," Ferrer said. Feliciano Lopez, who is likely to feature in doubles, said the evening timing was better for both teams and the tie. "Conditions are always crucial. We have played in different places. It's an advantage not for us but for other team also. To play in worse conditions would not be good for the show. It's a good choice to play in the evening," he said. Spanish captain Conchita Martinez said her players are good enough to play in any conditions.

"These players play on Tour whole year. The conditions are hard in Australia and at the US Open. So if we had to play during day, I am sure we would have been ready," Conchita, the 1994 Wimbledon champion and former world number two, said.

Comments
Topics mentioned in this article
Rafael Nadal David Ferrer Feliciano Lopez Marc Lopez Leander Paes Saketh Myneni Tennis
Get the latest updates on IPL 2020, check out the IPL Schedule for 2020 and Indian Premier League (IPL) Cricket live score . Like us on Facebook or follow us on Twitter for more sports updates. You can also download the NDTV Cricket app for Android or iOS.