Rafael Nadal has pulled out of Spain's Davis Cup World Group playoff tie vs India due to a stomach bug. He will be replaced by Feliciano Lopez in the singles rubber. 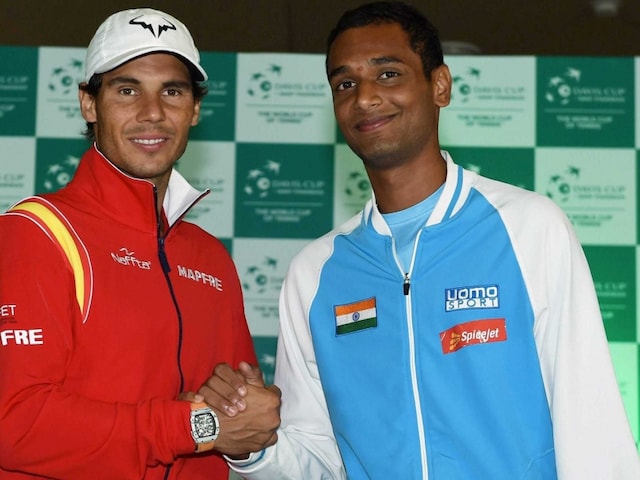 Rafael Nadal on Friday pulled out of Spain's Davis Cup World Group Play-off against India due to a stomach bug. He was due to play the first singles rubber against Ramkumar Ramanathan.

Left-handed player Feliciano Lopez will replace the former World No.1 for the rubber. However, if Nadal, the 14-time Grand Slam winner, recovers on time, he could play the reverse singles against Saketh Myneni on Sunday.

The second singles rubber will be played between India's Saketh Myneni and world No. 13 David Ferrer.

There was huge anticipation about Nadal playing in India, and that too in a Davis Cup match. The RK Khanna Tennis Complex stands were also expected to be packed due to his presence. But the sudden development will affect the crows turnout it seems.

Saturday will see doubles action where Leander Paes will play for India.

India had beaten Korea 4-1 in their Asia/Oceania Group I second round tie while Spain defeated Romania with the same margin in their Europe/Africa zonal tie.

India and Spain have locked horns thrice so far in Davis Cup with the European nation leading the head-to-head record 2-1. The last time India played Spain was as far back as 1965 when they lost the away tie 2-3.

Comments
Topics mentioned in this article
Rafael Nadal Feliciano Lopez Tennis Ramkumar Ramanathan David Ferrer
Get the latest updates on IPL 2020, check out the IPL Schedule for 2020 and Indian Premier League (IPL) Cricket live score . Like us on Facebook or follow us on Twitter for more sports updates. You can also download the NDTV Cricket app for Android or iOS.