Ferrer is currently ahead of the 11-time Grand Slam champion in the world rankings due to Nadal's seventh month layoff in the second-half of last season. 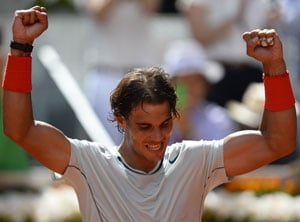 Rafael Nadal avoided becoming the latest big name to be dumped out of the Madrid Masters as he recovered from a set and a break down to beat compatriot David Ferrer 4-6, 7-6 (7/3), 6-0 to make the semi-finals.

Ferrer is currently ahead of the 11-time Grand Slam champion in the world rankings due to Nadal's seventh month layoff in the second-half of last season and despite a poor record against his compatriot he got off to the perfect start as he broke in the 10th game of the first set to take it 6-4.

In a topsy turvy second set it was Nadal who took the early advantage, before Ferrer came roaring back and looked well-placed for a first win against Nadal on clay for nine years when he moved 4-2 in front.

However, Nadal broke straight back and then went onto edge the set on a tie-break 7/3.

And once he had restored parity, the world number five was unstoppable as Ferrer's belief disappeared and Nadal charged through the third set 6-0 to set up a semi-final meeting with either Kei Nishikori, the conqueror of Roger Federer, or Pablo Andujar.

Comments
Topics mentioned in this article
Tennis Mahesh Bhupathi Mark Knowles Roger Federer David Ferrer Rafael Nadal Novak Djokovic Samantha Stosur
Get the latest Cricket news, check out the India cricket schedule, Cricket live score . Like us on Facebook or follow us on Twitter for more sports updates. You can also download the NDTV Cricket app for Android or iOS.