Novak Djokovic, who has six majors to his name, needs a Paris trophy to become just the eighth man in history to have won all four Grand Slam events. Rafael Nadal, meanwhile, will be the first to win nine French Open titles if he beats Djokovic on Sunday. 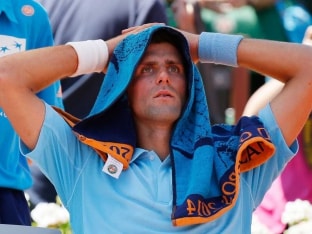 Novak Djokovic will on Sunday, attempt to become only the second man to beat eight-time champion Rafael Nadal at Roland Garros when the world's two best players meet in the French Open final.

Djokovic, who has six majors to his name, needs a Paris trophy to become just the eighth man in history to have won all four Grand Slam events.

He also has the advantage of having defeated Nadal in their last four meetings, including on clay in the Rome Masters final last month.

Djokovic was defeated by Nadal in the 2012 final in Paris but came desperately close to beating him in the semi-finals in 2013 when he led 4-2 in the final set.

The 27-year-old Serb, who is playing in his 13th Grand Slam final compared to Nadal's 20th, believes the key to victory is to take the Spaniard out of his comfort zone on the Philippe Chatrier court where he has only lost once, a fourth round exit to Robin Soderling in 2009.

"It's a very wide and very big court. He likes to have that visual effect, as well, because it appears that he gets every ball back," said Djokovic.

"He feels more comfortable when he plays on the bigger court. That's one of the reasons why he's so successful here.

"But we played some really close and good matches, good quality matches the last two years here, especially the one last year serving at 4-3 in the fifth set to go 5-3. It was a very close one.

"And knowing that I was that close to win against him the past two years gives me that reason to believe that I can make it this time. He's not unbeatable."

The momentum, however, appears to be with Nadal who allowed Wimbledon champion Andy Murray just six games in a brutal semi-final demolition on Friday.

"It's nothing new for Novak to be in the final here. He has the motivation to win Roland Garros for the first time for sure," said Nadal who has won their last three Grand Slam meetings and all four of their previous encounters at Roland Garros.

"But at the same time, he has the pressure to win for the first time."

In what will be the pair's 42nd meeting, world number one Nadal hopes to wrap up a ninth triumph in nine finals in Paris and take his record to 66 wins and just one defeat.

Victory would also make the 28-year-old the first man to win Roland Garros five years in a row and give him a 14th Grand Slam title, just three behind the record of 17 held by Roger Federer who is nearly five years older.

The rivalry between Nadal and Djokovic stretches back to 2006.

Their first meeting was in the quarter-finals at the French Open when Djokovic retired with back trouble.

Since then they have fought out a series of classic battles, most notably the 2012 Australian Open final which lasted almost six hours.

That match won by Djokovic was played under the Melbourne floodlights whereas Sunday's final is expected to be greeted by bright sunshine and temperatures pushing towards the 30-degree mark.

No wonder Nadal was all smiles.

"For me it is much better when the weather is like today. My ball creates more topspin. The ball goes quicker in the air, and with my forehand I am able to create more with less," said Nadal who has a career 13-4 winning record on clay over Djokovic.

Since winning his first title at Sopot in 2004, Nadal has suffered just 15 defeats on clay but three have come have come this year, the most recent of which was to Djokovic in Rome.

"The win in Rome definitely gives me confidence and hopefully self-belief," said Djokovic.

"On the other hand, the physical challenge that we present to each other is a very important factor in our matches. I know that I'm going to be facing a player who plays every point like a match point.

"He's a great fighter, and I know that it's going to be a physically very demanding match. But I'm ready for it."