It was the world number one's first match since losing in straight sets to Novak Djokovic in the final of the World Tour Finals in London on November 11. 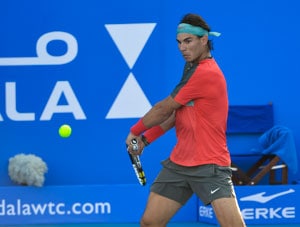 Rafael Nadal got his season underway with a 6-4, 6-4 loss to fellow Spaniard David Ferrer in the semi-finals of the Mubadala World Tennis Championship exhibition tournament in Abu Dhabi on Friday.

It was the world number one's first match since losing in straight sets to Novak Djokovic in the final of the World Tour Finals in London on November 11.

Playing ahead of the official ATP season-opener in nearby Doha next week, Ferrer looked the sharper from the start, breaking in the ninth game to take the first set.

It was more of the same in the second set as Nadal struggled to find his range against an opponent who already had a match under his belt, having defeated Stanislas Wawrinka in the quarter-finals on Thursday.

"I think, for a first match to play against a guy who has practised for a month and who played a match yesterday, on a very fast court, I was happy with how I played," Nadal told The National newspaper.

"I had a few opportunities, break points, but he played well and he converted the chances better than me. I had a few mistakes but in my opinion I was better than I thought I would be right now."

Ferrer goes on to play Djokovic, who was being watched by new coach Boris Becker, in Saturday's final after the world number two defeated Jo-Wilfried Tsonga 7-6 (7/5), 6-3.

"He has one of the strongest serves in the game, and it's very precise," said Djokovic.

"I exceeded my own expectations. My performance today was great."

Ferrer, who announced last week that he was splitting with long-time coach Javier Piles in a bid to finally win a Grand Slam title, said he had been helped by having already played in the tournament.

"I think the fact that I had already played a match on the same surface meant that I was better prepared than Rafa," said Ferrer.

"I am happy with the state of my game and will look to produce my best tennis for the final."

In earlier action, Andy Murray chalked up his first win since returning to action after a three-month injury lay-off by defeating Switzerland's Wawrinka 6-3, 6-4.

The 26-year-old Wimbledon champion had back surgery in September and did not play again until he lost to Tsonga in the quarter-finals on Thursday.

Wawrinka lost to Ferrer on the same day and the match between him and Murray was to decide who would finish fifth in the unofficial three-day tournament that saw Nadal and Djokovic joining in at the semi-final stage.

Murray looked much sharper against Wawrinka than he had looked in the second set against Tsonga and had little difficulty in seeing off the challenge of the world number eight.

The world number four got the better of three successive breaks to take the first set and then forged ahead again with a break for 4-3 in the second.

Wawrinka saved a match point on his own serve with a forehand winner, but Murray confidently served out for the victory.

In a courtside interview Murray said: "I feel pretty good, a lot better than I did a few months ago. I just need to play more matches like this because the intensity's a lot higher than you can get in practice.

"It was good to get two matches against top players. Everyone needs matches at this stage, especially me. It's been a perfect start and hopefully I'll get better."

Murray will next make the short trip over to Doha where he will play in the AFP season-opener tournament along with Nadal.