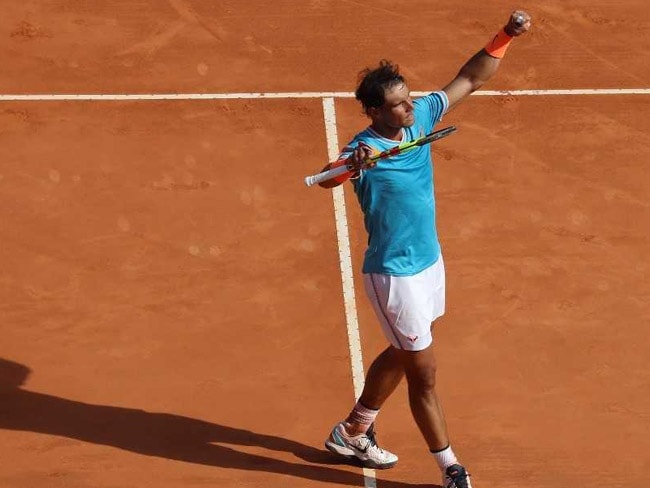 Rafael Nadal held off Jan-Lennard Struff 7-5, 7-5 in the Barcelona Open quarter-finals on Friday to move closer to setting an ATP record as the first player to win the same event 12 times. Nadal must first get through a Saturday semi-final between either 2017 finalist Dominic Thiem or Argentine Guido Pella. Nadal took an hour and three quarters to overcome Struff, in their first meeting.

"It's difficult to face someone for the first time," Spain's 17-time Grand Slam champion said.

"It was important that my serve was solid today. I'm feeling better in my game and hope to keep improving here at home."

Nadal is regaining his swagger after losing last weekend in the Monte Carlo semis to Italy's Fabio Fognini.

"I've played two good matches here after my first," he said, "The confidence is growing - and victories certainly help.

"I was able to find a way to win, my game is coming together now. I'm happy for today's match."

Nishikori will take on Russian Daniil Medvedev on Saturday after the seventh seed stopped lucky loser Nicolas Jarry of Chile 6-3, 6-4.

Nishikori, the winner here in 2014 and 2015, served out for victory after his 104th-ranked opponent slipped in the penultimate game and appeared to strain a right thigh muscle.

After Carballes Baena took an injury time out before returning to court, Nishikori wrapped up the win.

"In the first set, everything was working well for me," Nishikori said. "I was hitting my forehand heavy, which I think you need to do on clay."

The contest quickly turned into am exchange of pounding groundstrokes, Nishikori striking first when he broke in the opening game. That was enough to claim the first set.

Fourth seed Nishikori finally broke for 6-5 though as Carballes Baena suffered his mishap.

"It was frustrating missing on those break points, I twice had 40-0," Nishikori said. "Mentally it was not easy at all.

"But I knew I was playing well, I tried to stay steady even through he was pushing me, I just tried to play my tennis.

"In the second he started to play better, the last two games were very good tennis for me."

Nishikori has won two of his three matches against Medvedev, including the Brisbane final in January.

"Medvedev is a tough player, he's got a great serve, good reach and he moves well," said Nishikori.

"I'm expecting many long rallies. I need to play aggressive if I want to have a chance at winning."

Comments
Topics mentioned in this article
Rafael Nadal Tennis
Get the latest updates on IPL 2021, check out the IPL 2021 Schedule and Indian Premier League Live Score . Like us on Facebook or follow us on Twitter for more sports updates. You can also download the NDTV Cricket app for Android or iOS.