Rafael Nadal, who hasn't reached a major quarter-final since Roland Garros last year, was defeated in five sets by Frenchman Lucas Pouille in the US Open fourth round match 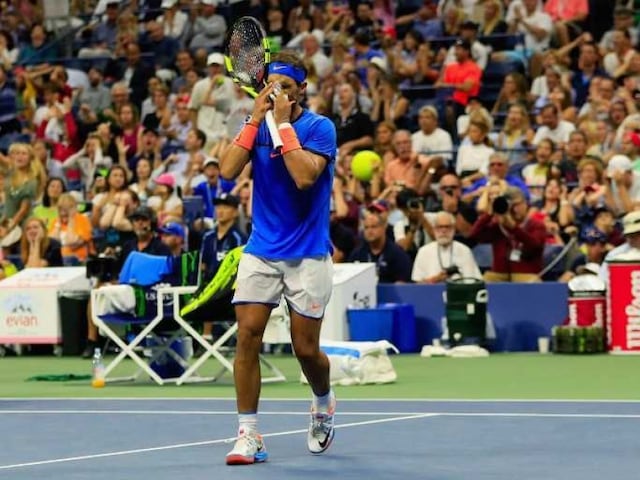 Rafael Nadal reacts after losing in the US Open fourth round to Lucas Pouille.© AFP

Fourteen-time Grand Slam champion Rafael Nadal was sent crashing out of the US Open on Sunday, falling in a five-set thriller to 22-year-old Frenchman Lucas Pouille.

Fourth-seeded Nadal, forced out of the French Open third round by a wrist injury that also kept him out of Wimbledon, hasn't reached a major quarter-final since Roland Garros last year.

Down 3-6 in the fifth-set tiebreaker Nadal saved three match points -- the third on Pouille's serve. But the Spaniard's error from the baseline gave Pouille another chance and he seized it with a forehand winner.

"At 6-3, I was thinking OK, you're going to win this one. At six-all it was not the same," said Pouille, who said his major takeaway from the scintillating duel was "it's never over until the last point."

After breaking Pouille in the opening game of the fifth Nadal appeared to have things in hand, not facing a break point until the eighth game, when he may have been rattled by a time violation before serving at 30-all.

He surrendered the next point, and after saving one break point Pouille gave himself another with a sharp volley, and leveled the set at 4-4 when Nadal sailed a forehand well out.

Nadal was unable to convert a break point in the next game and they carried on to the tiebreaker -- where Pouille wrapped it up after four hours and seven minutes on Arthur Ashe stadium court.

Pouille, who has yet to win his first ATP title, came out firing and ripped through the first set in 28 minutes.

Nadal responded in kind in the second, breaking Pouille in the second game en route to a 3-0 lead, holding off four break points in the fifth game and breaking again to level the match at a set apiece.

It was Pouille who gained a break in the first game of the third and made it stand up.

In the fourth, Nadal broke Pouille for a 4-2 lead, launching an exchange of three straight breaks that left the Spaniard to serve it out and force the decider.

Comments
Topics mentioned in this article
Rafael Nadal Lucas Pouille Gael Monfils Tennis
Get the latest Cricket news, check out the India cricket schedule, Cricket live score . Like us on Facebook or follow us on Twitter for more sports updates. You can also download the NDTV Cricket app for Android or iOS.